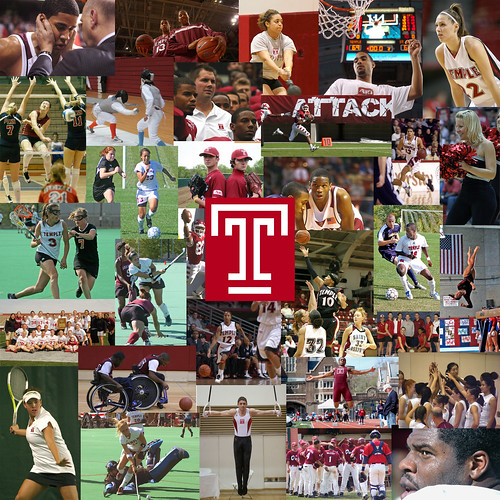 A return to glory.

That was the feeling that radiated throughout Boardwalk Hall as the men’s basketball team secured its first NCAA Tournament berth in seven years by defeating its city rival and arch-nemesis, Saint Joseph’s, 69-64, in the Atlantic Ten Conference Championship game in Atlantic City, N.J. on March 15.

As friends, family, fans and media members flooded the court, the players each took turns cutting down the nets, savoring every second of their victory.
The accomplishment was one of many memorable moments that highlighted the 2007-2008 athletic seasons.

Among the others:
The women’s lacrosse and tennis teams both won A-10 Tournament championships in April. Lacrosse junior Britney Hoffman scored four goals to help the Owls beat Massachusetts, 10-3, in the title game, while first-year coach Jill Breslin led the tennis team to a 4-0 victory over Xavier for the A-10 crown.

Field hockey senior midfielder Alli Lokey was selected as a Second Team All-American by the National Field Hockey Coaches Association after leading the Owls and the A-10 in goals with 18 last season, a mark which was second-best in the nation. She also led the A-10 in eight other categories.

Here’s a look back at other memorable moments of the 2007-2008 athletic year:

“I hope to be on the sidelines when Temple field hockey returns to the Final Four,” said McKernan Robinson, a 1958 Temple graduate, in a statement. “But most of all, I hope that our gift will get other Temple alums to think about the assets they have and the legacies they could leave.”

UCONN-ED — SEPT. 15
Trailing host Connecticut, 22-17, with 40 seconds remaining, the Owls ran a trick play where sophomore wide receiver Dy’Onne Crudup’s pass to red-shirt junior quarterback Adam DiMichele deflected off of Huskies free safety Robert Vaughn and landed in the hands of junior wide receiver Bruce Francis, who caught the ball in the back of the end zone.

Although it appeared that Francis’ left foot may have been inbounds when he caught the deflection, referees called the play incomplete. After an extensive video review, officials upheld the call. Following the game, Big East Conference replay official Jack Kramer said there was “not enough video evidence to reverse the play on the field.”

The controversial call put the Owls in a 0-3 hole to begin the season. The two teams will meet again next season, this time at Lincoln Financial Field, on Saturday, Sept. 6.

The hat trick-plus one was the most goals scored by a Temple player since Toni Byard accomplished the feat in 1992. Furthermore, Lokey, who earned A-10 Player of the Week honors based off her performance, scored the goals against M.J. Britts, who entered the game ranked first in the nation in save percentage.

UPSET, UPSET! — JAN. 16
Second-year coach Fran Dunphy got his first win over a ranked team at Temple when the Owls blew out No. 20 Xavier, 78-59, at the Liacouras Center. Junior Dionte Christmas became the 44th member of the 1,000-point club after scoring a game-high 23 points in the victory.

After beating the Musketeers, The Owls won 14 of their next 18 games on their way to an A-10 Championship.

UPSET, UPSET! PART DEUX — JAN. 19
After losing 2007 A-10 Player of the Year Kamesha Hairston, who was drafted by the WNBA’s Connecticut Sun, expectations weren’t high for the women’s basketball team this season.

But, after struggling through a tough non-conference schedule, the Owls pulled off a surprise 68-66 victory over No. 13 George Washington at the Liacouras Center.

It was the Owls’ second victory in a seven-game win streak. The squad would go on to win 12 of their last 13 regular season games en route to the program’s fifth straight NCAA Tournament berth.

COLE: RECORD BREAKER — JAN. 18
Junior thrower Amanda Cole broke her own school record in the indoor weight throw with a distance of 52-2 ½ feet at the Gotham Cup at the New York Armory. She finished in first place in the weight throw at that competition.
The next week, Cole won the weight throw again at the Great Dane Classic, this time coming within less than an inch (52-1 ¾) of tying the record she just set.

SHOWDOWN AT THE
PALESTRA — MARCH 2
The men’s basketball team engaged in a three-round heavyweight bout with Saint Joseph’s this season, losing the first engagement at the Liacouras Center, 68-67, on Pat Calathes’ three-pointer with 3.9 seconds left.

The rematch proved to be just as close. In front of a capacity crowd at the Palestra, the Owls pulled out a tough 57-56 come-from-behind victory on senior guard Mark Tyndale’s game-winning lay-up with 21 seconds remaining. The Hawks missed three shots in the final seconds before sophomore guard Ryan Brooks hauled in the final rebound of the game to secure the win for the Owls.

Thirteen days later, Temple would go on to win the rubber match, 69-64, in the A-10 Championship game.

FENCERS SOAR —
MARCH 15
After finishing the season with a 24-6 overall mark and ranking eighth in the United States Fencing Coaches Association Women’s Fencing Coaches Poll, the fencing team had four athletes participate in the NCAA Championships in Columbus, Ohio. The Owls finished ninth out of 23 teams at the two-day competition.
Sophomore Melissa Parker, a second-team All-American, finished seventh in the foil, while her teammate, fellow sophomore Kristin Howell, an honorable mention All-American, also registered a top 10 finish, placing ninth in the epee. Sophomore Christie Griffith and freshman Grace Wu finished 23rd and 19th in the sabre and epee competitions, respectively.

In conjunction with Fox Chase Temple, players and coaches from the team assisted donors in filling out paperwork. Temple Director of Athletics Bill Bradshaw, men’s basketball coach Fran Dunphy and Provost Lisa Staino-Coico were among the donors.

Keffiyehs torn between terror and couture

“Sheer striped scarf woven with some Lurex for a bit of sparkle. Finished with tonal fringe. Exclusive to Urban Outfitters. Imported. Dry clean.” This description, found on the Urban Outfitters Web site, paints a picture

Close to the postseason

The baseball team can clinch its first Atlantic Ten Conference Tournament appearance two days from today. With a win over St. Louis Thursday or losses by both Fordham and George Washington, Temple (23-26, 14-10 A-10)

Editor: Lately I’ve been hearing a lot of talk from talking heads who are decidedly not working class telling me that white working class people have a problem with Rev. Jeremiah Wright. Apparently, as a