It’s not easy being Republican at Temple, let alone in Philadelphia.

“Our challenges originally were letting people know that we exist,” said Brian McGovern, president of the Temple College Republicans. “That’s still our challenge today, but we’re doing a lot better with it.”

Temple has had a strong Democratic presence on campus since the six weeks leading up to the Pennsylvania Primary in April. Campus visits from Sen. Hillary Clinton and her daughter, Chelsea, cast a shadow over Sen. John McCain, who at the time was already the presumptive Republican nominee for president. 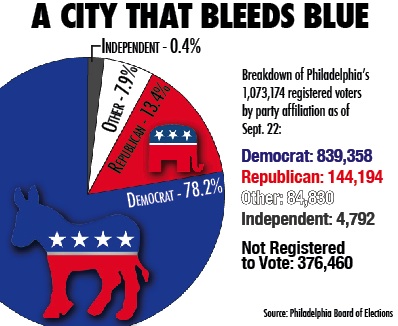 So far this semester, Temple has hosted big-name supporters of Sen. Barack Obama, including Private Practice star Kate Walsh and Howard Dean, chairman of the Democratic National Committee. The Republican presence isn’t as easy to find.

“This isn’t just any college campus,” said McGovern, a senior political science major. “This is Temple University in one of the most Democratic cities in the United States.”

“Young people are just smart and more likely to be in tune with a more people-oriented message,” Street said. “Young people worry more about the poor [and] working-class issues and are not yet burdened with making a living.”

It’s important, then, for McGovern and the College Republicans to spread the messages of McCain and his running-mate, Alaska Gov. Sarah Palin.

“We believe that if people knew about the Republican message and not what certain news outlets or what their friends say, they would see that our message does work for them,” McGovern said.

The College Republicans began a few years ago with a handful of students. Recently, the group runs out of vacant seats at its meetings, which average 30 to 50 students, McGovern said.

But it’s not the only political group on campus. The Temple College Democrats were the organizers of the recent Howard Dean visit, which attracted more than 100 students for a midday rally on Sept. 19.

“I think that we are a more liberal campus, so I think that there’s a warm and open reception to us and the things we do,” said Elizabeth Hanson, president of the College Democrats. “On [the Republicans’] side, their message may not feel as welcome all the time.”

McGovern said the relationship between the two groups was “shaky” a few years ago, but they now share a “decent friendship.”

“We want to be controversial, but we don’t want to be too controversial,” McGovern said. “We’re looking to keep the discourse civil on campus, and maintaining our relationships helps to keep it civil.”

Hanson, a junior political science major, agrees with McGovern and added that forming a good relationship now can help in their political futures.

“We know that even though we differ on most things, it’s better to learn to reach across the aisle now because how else would we do it in Washington?” she said.

DEMOCRATIC DOMINANCE
Philadelphia hasn’t had a Republican mayor since Bernard Samuel in 1952.

“Philadelphia is a blue-collar town dominated by unions, poor people and minorities,” Street said. “In all fairness, it’s hard for the Republicans to get the political traction in most neighborhoods.”

Street, who teaches a political science course at Temple on urban politics, succeeded Ed Rendell as mayor in December 1999. He said it’ll be a while until Philadelphia sees a Republican mayor.

“It will be tough for any Republican to win until the Democrats make a bad mistake,” Street said. “Times change. Political parties get fat and comfortable.”

But Street credits U.S. Rep. Bob Brady with staying on top of Philadelphia’s Democratic Party and said he does not see “any big opportunity for the Republicans in the near future.”

Michael Hagen, a professor in the political science department, said Republican mayoral candidates shouldn’t be written off the ballot just yet.

“They haven’t been out of the running in every mayoral election,” Hagen said. “There have been reputable candidates who have done pretty well. Those who have had a chance of doing well have faced an unpopular incumbent.”

In 1999 and 2003, Street’s Republican opponent in the mayoral elections was Sam Katz.

“Katz ran a great campaign and was as liberal as most Democrats and he still lost,” Street said, adding that he thinks the Democrats’ biggest vulnerability is the mishandling of finances of the city.

McGovern questions how many Philadelphians are happy with the direction of the city under Democratic control.

“If the same problems are coming up again and again, it’s time to take a look at the problems and realize that maybe it’s time for the Republicans to come in and find a different way to change things,” he said.

PENNSYLVANIA PROMINENCE
On Saturday, the McCain campaign opened its second victory office in Philadelphia at 1008 Arch St. The original is located in Northeast Philadelphia at 3605 Cottman Ave.

“We have a presence in every region in the city,” said Paul Lindsay, a spokesman for the McCain campaign.

However, there are 11 Obama offices throughout the city, which Hagen said signifies that the Philadelphia vote will be a crucial component to winning the state on Election Day.

Street agreed, saying the Philadelphia vote has been important in recent elections, citing Sen. John Kerry’s winning Philadelphia in 2004 by 420,000 votes. Kerry won Pennsylvania with 51 percent of the vote.

“Democrats cannot win statewide elections without a big plurality coming out of Philadelphia,” Street said. “Turnout of Democrats in Philadelphia is crucial to Obama’s chance of winning the state.”

Visits to Philadelphia by McCain and Palin have been few and far between, but Lindsay said the campaign has not lost sight of the Delaware Valley.

“Senator McCain will continue to travel throughout every region of Pennsylvania, and we’ll continue to focus on the Philadelphia area, especially,” Lindsay said.

He added that McCain “has always appealed to independents, Democrats and the Republican base,” but Street said the senator should take caution when campaigning.

“He has very little chance of winning Philadelphia. His goal has to be to avoid getting trounced in Philadelphia so bad that he loses the state,” Street said. “He should be very careful to motivate his base without getting the strong Democratic areas all excited about the election.”

For McCain in Philadelphia, Street said, “the lower the overall turnout, the better.”

VOTING MATTERS
“I would love to see as many registered Republicans as there could be,” the College Republicans’ McGovern said. “But it’s really important to me for people to exercise their right to vote. People across the world don’t always have that right.”

Both the College Republicans and Democrats have been volunteering with their respective campaigns and trying to get Temple students energized about voting on Nov. 4. Students with clipboards stand on busy street corners asking passers-by if they’re registered to vote. The deadline to register in Pennsylvania is Monday, Oct. 6.

Hanson of the College Democrats said it’s not always easy for her group to rally students.

“I think we face challenges that any student organization faces – people balancing work, school and life,” Hanson said. “It’s finding a way to make [the campaign] relevant and exciting and urgent on campus.”

The groups are in the process of organizing a debate slated for Oct. 20. It’s an opportunity for members of both groups to discuss civilly the issues that matter to them – college students – and create a forum for discussion.

“There should be a place for everyone’s political ideals in a place of education,” McGovern said. “We provide that, and we’re going to continue to provide that.”

The C-SPAN Campaign 2008 bus visited Temple’s campus yesterday as part of the “Road to the White House” tour. The 45-foot long, 22-ton bus parked at the Bell Tower, offering tours to students of the

On Nov. 4, some had problems making their votes count, and there are still questions two weeks later.

Hundreds of supporters for both Sen. Hillary Clinton and Sen. Barack Obama stood outside the National Constitution Center hours before Wednesday’s debate. Though it appeared Clinton supporters outnumbered Obama’s, both groups were enthusiastic for their