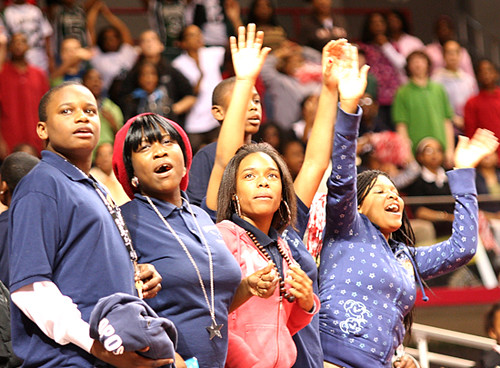 With all due respect to Lewis Katz and his $10,000 sports attendance increase incentive, what the Board of Trustees member doesn’t realize is that his vision is already happening on Temple’s campus.

Temple saw its average football attendance increase 82.5 percent this fall to 28,858 people per game. Men’s basketball attendance has also risen. Through eight games this season, the public has been packing the Liacouras Center to the tune of 7,312 people per game, a 65.6 percent increase from last year. Neither increase took monetary motivation to pull off.
“I think attendance is generally based on three main factors,” said Eric Roedl, senior associate athletic director. “You’ve got the competitive success of your teams, which tends to attract more fans the better you do. Another one would be scheduling, the opponents that you’re playing against, and the date you’re playing them. It’s a lot different playing a marquee opponent when your students are here versus when they aren’t. I think the third major thing would be your marketing and promotional efforts.”

The increase in football attendance could certainly be based on the team’s improved record from 2006’s disappointing 1-11 finish.

The Owls won four games and finished the season 4-4 in the Mid-American Conference, with an overall record of 4-8. The team’s success on the field, coupled with a formidable home schedule featuring MAC East Division leader Miami (Ohio) and Penn State convinced more people to pass through the turnstiles. The Penn State ticket incentive and free tuition promotions didn’t hurt, either.

“If you’re a student, you like free stuff and a chance to win free stuff,” said Scott Walcoff, assistant athletic director for marketing and promotions. “Obviously, tuition was a huge thing. What student is not going to attend a football game for a chance to win free tuition? If I’m a parent, I’m sending my kid to that game whether or not you like football. That’s all it takes, so we try to have a giveaway at every game.”

The men’s basketball team does just that. On top of playing nationally ranked opponents Villanova, Duke, and Xavier at home this season, as well as Philadelphia rival St. Joseph’s, the team has given away items like rally towels and T-shirts. The 12-10 Owls, who are fourth in the Atlantic Ten Conference with a record of 5-3, have their next major giveaway on Feb. 23 versus Fordham. “Back to the Beach” Day will feature a free Temple beach bag for the first 3,000 fans 14 and under, a calypso band, and leis.

And as for Katz’s idea?

“We’re never going to turn down ideas on ways to get people in the seats,” Walcoff said. “If someone has an idea that is feasible, can be implemented, and we think will work and make sense, we’re going to find a way to do it.”