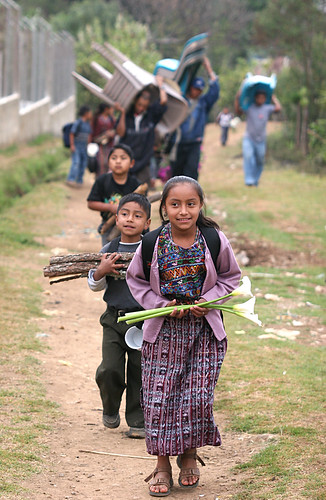 She crouched behind her mother, smirking playfully at me as a game of hide-and-seek began. She hid behind her mother as I hid behind my camera, having an exchange beyond language, beyond cultural barriers.
From what little Spanish I knew, this Guatemalan girl told me her name was Angelica. She and about 550 other students attend the Centro Choatalun Primary School in Guatemala. She stood in the classroom with her friends, which was located in a rural community in San Martin, Jilotepeque. Dirt floors, cinderblock walls and a sheet of metal acted as the roof – the foundation of the school was merely an efficient use of resources.

Last week, 18 Temple Volunteers, myself included, spent spring break in Guatemala building a school kitchen to improve food preparation and hygiene. The experience was a service-immersion trip made possible by the efforts of Temple’s Office of Community Relations and Temple Volunteers. Other trips are offered through winter break taking students to communities in Mexico, Belize and South Dakota. Costs of the trip were covered through fundraising and donations from sponsors.

Our trip to Guatemala was never a destination, but a weeklong journey of manual labor, travel and interaction with local people from the communities we visited in Guatemala – a far cry from beers and beaches, and more than a couch and television re-runs.

But it was beyond building a kitchen for a school. We worked side-by-side with members from the community, people we’ve never met before, working toward a common goal for the betterment of the community. Performing an act of service is the most basic gift you can give to someone. It doesn’t matter who they are.

Our team worked with SHARE Guatemala, a non-profit organization with more than 16 years of experience that works to fight poverty problems that affect Guatemalan families, young people and children. The organization works toward empowering communities by having them identify their needs and how to meet them. They participate in humanitarian and national emergency efforts.

Through SHARE, I was able to work with the community, which opened my eyes to how similar our world is. Despite cultural differences and being lost in translation, the people I met were fundamentally human with basic wants and needs. As I photographed these people, their faces became familiar to me. Their faces weren’t exotic or unknown. These were people who I had come to know and to understand.

Kids too are the same deep down inside, where piggy-back rides and hide-and-seek are games that don’t need a Spanish-to-English dictionary.

As our group makes our way back to Philadelphia, a young girl sits in front of me on the airplane. I rest comfortably on my seat as she hid behind the chair, giving me that same playful smirk as another game of hide-and-seek began.

Neal Santos can be reached at neal@temple.edu.