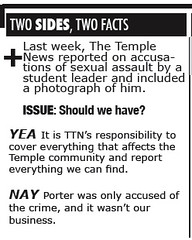 Andrew J. Porter is, as of print, innocent of the crimes alleged against him.

Porter, 21, was arrested Jan. 30 and charged with two counts of rape and related offenses, as reported by The Temple News. We printed his name, his address and his photograph. It’s what we would do for any student who stands accused of grave crimes that could affect others at Temple.

Still, as student names go in this expansive university community, Porter’s is a well known one. He has a foot in the Organization of African Students. He is a member of Associones de Estudiantes Latinos. He is the president of Lambda Theta Phi, the Latin Fraternity, the same fraternity of which Temple Student Government President Juan Galeano is a member.

Indeed, Porter, an accounting major, has close friendships with a host of Temple’s student leaders, most notably TSG’s top brass. It is these friends, among his dearest and most powerful, who have come most quickly to his defense. With little exception, those who have defended Porter and criticized our reporting are students who have and hold the respect of The Temple News.

However, it is not a newspaper’s position to decide the guilt or innocence of anyone, reputations and references aside. We take very seriously our responsibility to inform the Temple community about all of what affects it. Accusations of sexual assault are most certainly included in that.

What is lost in this story, like many similar stories, is that two women – who reportedly didn’t even know his last name – went to police with accusations that led to the litany of charges he is alleged to have committed: sexual and indecent assault, indecent exposure, felonious restraint and one count of deviant sexual intercourse.

Now, Porter is suspended from the university, awaiting a preliminary hearing, after a preliminary arraignment earlier this month. And many close to him think you shouldn’t know about it.

Some criticized us for only writing about these purported crimes of Porter’s, not the good work he has done. This is untrue. Just last October, another photograph of Porter ran in The Temple News. Porter was with other members of Associones de Estudiantes Latinos in a photo adjacent to an article on Latino Heritage Month [“A month-long celebration of Latino heritage, culture,” Jenna Snader, Oct. 23, 2007].

Others were most concerned about our using a photograph of him – supplied to us by the Special Victims Unit of the Philadelphia Police as per protocol for all accused sex offenders. Of course, one of the primary reasons for publishing it is to encourage other women who may have hidden their assaults to come forward. These two women only knew his first name. Another might not know either.

Sexual assault has long been considered the most underreported crime there is. So, these reports become the most important work we do. We wonder the thoughts of the Feminist Majority Leadership Alliance and the leaders of the Sexual Assault Counseling and Education program run by Tuttleman Counseling Services.
This is no subject on which you should be silent.