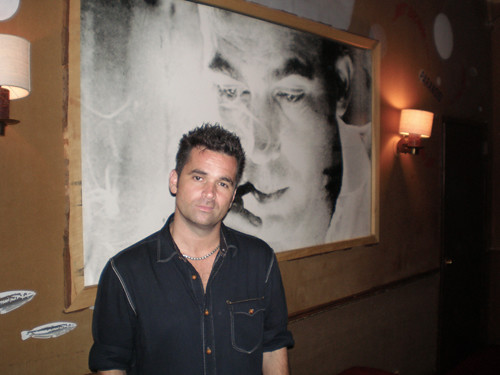 Imagine a job where you’re paid to drink.

You get into a high-end club thanks to the VIP list and are instructed to try as many different expensive wines and liquors as possible, while still remaining conscious. Finally, possibly your biggest task: to remember your night well enough to write about it the next day.

Sounds like the perfect job, right? However, it seems too good to be true. But when you’re an “outlaw booze writer” like Temple alumnus Dan Dunn, your job sometimes goes above, beyond and off the bar stool when compared to the typical nine-to-five.

After spending upwards of a decade of his post-college years as a starving writer searching for work – while crashing on random floors throughout the country – Dunn ended up in Los Angeles with a wine and spirits column and plenty of smashed stories starving to be told.

Dunn’s first book, Nobody Likes a Quitter: And Other Reasons to Avoid Rehab recounts his loaded tales from Philadelphia to Los Angeles and everywhere in between.

“The potential for craziness is great when you work at a job that requires you to consume intoxicants,” Dunn said. “So I’ve had my share of wild adventures.”

Naturally, however, he gives his alma mater credit for starting it all.

“Everything in life that you experience informs your work,” Dunn said. “And having spent four years at Temple, I guess I can blame them for a lot of the craziness that’s happened since.”

In 1993, after Dunn graduated, he said goodbye to Philadelphia and headed for Aspen to live with friends while working his way into some freelancing gigs. He quickly became an object of envy for writers everywhere.

“I ran for mayor of Aspen, and Hunter S. Thompson liked that,” he said. “So he got my number, called me up and wanted to meet me.”

“Reading him and becoming friends with him was very valuable,” Dunn said. “There were so many lessons I learned hanging around at his place and meeting his friends. He was the real deal. Just being around him was a huge source of inspiration and motivation for me.”

And motivated he was. While in Aspen, Dunn freelanced for several publications, including Aspen magazine. Upon moving to Los Angeles, he began writing a column for Metro International Newspapers, which inspired Nobody Likes a Quitter.”

“My column, ‘The Imbiber,’ is a humor column disguised as a wine and spirits column,” Dunn said. “I created a character to be the mouthpiece to deliver the information, and it became a popular feature in the Metro. So I decided to get all of it down in book form and wrote it in three months.”

Nobody Likes a Quitter shows, in memoir form, Dunn’s life as a true writer: inspired by everything around him, even in the most inebriated of times.

“I’m a drinker with a writing problem,” Dunn said. “I feel like I’m always working. If I’m not writing, I’m thinking about writing or thinking about stuff that would make for a funny column or a book.”

Senior history major John Taylor knows quite a bit about Dunn, and they have something important in common: their mothers.

Dunn, 39, and Taylor, 21, were always close, despite a significant age gap. Taylor always made an effort to keep in touch with his brother and, of course, never turned down a vacation to see him.

“I was in Aspen and L.A. to see him since I was younger, and I’m going to drive out to the West Coast again this summer,” Taylor said. “I love road trips.”

Nobody Likes a Quitter allowed Taylor to catch up on the part of Dunn’s life before Taylor was old enough to understand.

“It’s good reading his stories,” Taylor said. “He has the best job in the world. I usually never read. His book was an accomplishment for me.”

Christopher Wanjek went to high school with Dunn in Philadelphia. When they discovered they were both planning to enroll in Temple’s journalism program, they became closer friends.

“At Temple, Dan started the Society for Creative Journalists,” Wanjek said. “It was a great thing. He was always enamored by writing columns.”

A former NASA employee, Wanjek now works as a writer for the National Institutes of Health in Bethesda, Md. However, he said he doesn’t need to have a medical background to realize the effect of Nobody Likes a Quitter.

“The book is essentially a prescription for bad health,” Wanjek said. “It’s a barkeeper’s book with a storyline behind it – something never really seen or thought about before.”

Wanjek said that Dunn’s column is also unique to journalism, which is why it has been successful for so long.

“He’s not winging it,” Wanjek said. “He uses humor with intelligent descriptions of drinks and their histories, and sometimes even cigars. He really created a niche for himself.”

Nobody Likes a Quitter conveys every aspect of post-college life, from parties to relationships to work. Also, its humorous literary style reaches a more universal audience.“

My book should be essential reading for all of the students at Temple University, whether it be a how-to guide or a cautionary tale, depending on what your perspective is,” Dunn said.

Even though Dunn’s ways have brought him success, he doesn’t advise every reader to repeat them.

“Buy my book, read my book, and then forget everything in the book and you’ll be just fine,” Dunn said. “Read it and do the exact opposite and you’ll probably have a great career.”

Carlene Majorino can be reached at carlene.majorino@temple.edu.