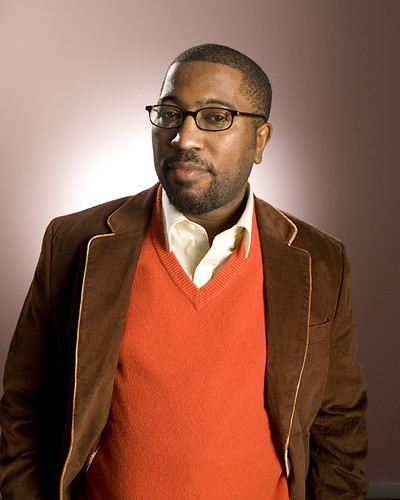 When it comes to urban literature, most people expect to hear about the author’s struggle. In fact, most read it just to discover how bad the author had it while growing up in a place like North Philadelphia.

Readers want the underdog story of a boy who was in the midst of a drug-and-violence vortex, but then experienced an epiphany that transformed him into an accomplished author.
Major Jackson, Temple alumnus and published poet, tells no such tale.

“I don’t have one of those sensational stories,” he said.

Raised on 22nd and Master streets, Jackson said both of his parents were well-employed and his childhood was pleasant overall.
“My life wasn’t tough,” he said. “But that of my friends, yes, definitely it was tough.”

Jackson described his experience as a witness to the lives of his friends and cousins. Among the disparities he observed were the lack of opportunities available and an unforgiving economic system. Jackson explained that he watched their struggles, as well as those of the lower classes everywhere, and called the urban environment a national phenomenon.

“It is evident even in New England,” said Jackson, an English professor at University of Vermont since 2002.

Although he left Temple with a degree in accounting, Jackson said he was more interested in writing. It was not until his sophomore and junior years that he began to take classes in poetry and creative writing.

After graduation in 1992, Jackson joined the workforce at a law firm in New Orleans. He continued to write, however, and received a Pew Fellowship in the Arts in 1995. This achievement pushed him to write more seriously and intensely.

Jackson obtained a graduate teaching position at Xavier University in New Orleans, but continued to perform accounting services during the summer. He eventually published two books of poetry – one in 2002 and the most recent, Hoops, in 2006.

Despite his lack of direct experience, Jackson said he has an enormous amount of empathy for the underdog. He explained that all of his childhood friends were generally good, but had turned to unhealthy and dangerous lifestyles out of desperation.

“I know how certain communities can be demonized,” Jackson said. “The purpose of my work is to counter that representation.”
Witnessing the struggle of others has triggered the desire in Jackson to become an educator. He hopes to encourage optimism, hope, creativity and art, which are so desirable in a life of chaos and despair.

These experiences are what inspire his art of poetry. Jackson said he cannot help but feel a great sense of return when he visits his hometown.
“I love Philadelphia to the core,” he said.

He admitted, though, that it saddens him to hear about the climbing homicide rate in the city he calls rich, artistically creative and beautiful.
“Because of the great light, there is a dark side,” Jackson said.

As much as he would love to return and live in Philadelphia, Jackson said he does not want to subject his son to experiencing or witnessing violence.

“Part of me becoming an artist or a writer is that rupture in the possibility of humankind’s ability to take care of itself,” he said. “It can break you down pretty quickly.”
However, Jackson went on to describe art’s purpose in an urban environment like North Philadelphia.

“Art is about creating order,” he said. “It helps give shape to chaos.”

When he was young, Jackson found inspiration in authors like Langston Hughes and Robert Frost. He also took great interest in the works of Gwendolyn Brooks, specifically her book Annie Allen. Jackson said that he turns to her for inspiration when writing about Philadelphia, as she wrote so voluminously, deeply and thoroughly about her city of Chicago.

“I wanted to inform her of the changes that have occurred after her passing,” he said. “I learned a lot from writing that letter.”

In his current position, Jackson attempts to inspire his students through his own writing and through the poems he loves. He hopes to empower them with the confidence to say what they want to say, and to do so artfully.

As for his readers, he said he hopes they enjoy his work and consider the various topics he discusses.
“I hope it’s engaging to people on a level that reality TV could never be,” he said.