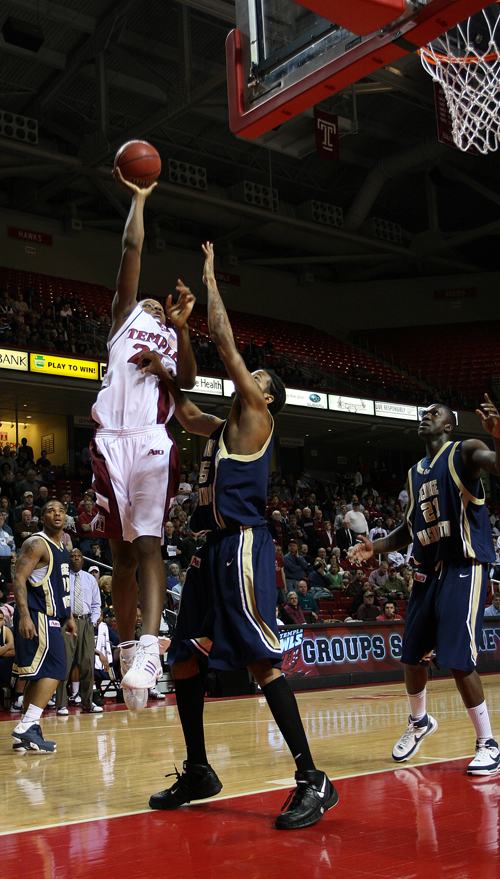 Rising above the many uncertainties stemming from the men’s basketball team last year stood a defiant truth: the Owls had the most dynamic and formidable scoring tandem in the Atlantic Ten Conference.
The tandem of Temple guards  set an A-10 record by finishing the season No. 1 and No. 2 in scoring at 20 and 19.4 points per game, respectively.

With that in mind, it was only appropriate that senior Tyndale and junior Christmas own the billing “One-Two Punch,” a moniker that’s plastered on the front of the Owls media guide. And more than halfway through the season, this combination has propelled the Owls to an 11-9 overall record and 4-2 start in the A-10.

“I think we do a good job of pushing each other at practice. I think our teammates are helping us out and taking a lot of pressure off us by stepping up, like Chris Clark [on Sunday], Ryan Brooks the other day and Lavoy Allen also,” Tyndale said after the Owls defeated George Washington, 93-80, Sunday at the Liacouras Center. “Those guys are just stepping up and our point guard play has been good with Luis [Guzman], Semaj [Inge] and Chris Clark.”

Through 20 games, Christmas has led the team in scoring 15 times, while Tyndale has shouldered the load three times. Christmas is currently leading the A-10 in scoring, averaging 20.5 points per game, while Tyndale is 11th at 15.8 points per contest. Against George Washington (5-12, 1-6 A-10), the pair scored 21 points a piece.

Opponents have recognized the threat, but continue to have trouble shutting down the two complimentary styles of scoring.

“They pose a lot of multiple threats out on the floor,” sophomore Ryan Brooks said. “Christmas [is] more of a perimeter scorer, hitting jump shots. Tyndale can slash but he can also take you off the dribble, pull back, and he can hit the jump shot. They’ve both been working on their weaknesses but their strengths can definitely hurt you as well.”

Tyndale and Christmas have also evolved beyond scoring and find themselves contributing in many other ways. Both earn 6.4 rebounds per game, which locks them for first among the Owls.
Tyndale leads the team in assists per game with 3.6, while Christmas’s 2.6 assists are second-best on the team.

“We can’t do good things without [those] two guys being focused each and every time we play the game,” coach Fran Dunphy said of the duo.

While the statistics don’t lie, the Owls’ one-two punch has realized that a knockout is impossible without a supporting cast.

“We’ve been working hard, me and Mark. I think we’ve been doing a great job thus far this year,” Christmas said. “I think our teammates are doing a good job helping us out in scoring. When Chris [Clark] steps up like he did [against George Washington] and Lavoy and Sergio [Olmos] and everybody steps up that takes a lot of pressure off of us so that’s definitely a big addition to the team.”

The Owls have been playing their best basketball as of late, winning five of their last six games. In each of those wins it’s been a solid “third punch” that has pushed the Owls to victory.

Clark, a senior guard, netted a team-high 16 points against Fordham last week to become the first player other than Tyndale or Christmas to lead the Owls in scoring this season.

Against George Washington, the Owls had five scorers in double figures, including Clark, who posted a career-high 17 points against the Colonials on his 22nd birthday. Allen, a freshman forward, chipped in with a career-high 19 points and Olmos, a junior center, added 10 points.

For the “one-two punch” of Tyndale and Christmas, it’s been a season as advertised, but work will need to be done to mirror their successful individual seasons with a satisfying team campaign.

If recent trends are any indication, the Owls look to be on a bountiful track.

The 1987-1988 Temple men’s basketball team that finished the season ranked No. 1 in the final Associated Press national poll was honored at halftime of the Owls game against George Washington. Under the guidance of former coach John Chaney, that squad finished with a 32-2 overall record and a spotless 18-0 record in the A-10. The Owls magical run ended in the Elite Eight round of the NCAA Tournament with a loss to 63-55 loss to the Duke Blue Devils on March 26, 1988.

Along with Chaney and assistant coach Jay Norman, several players from the 1987-88 team were in attendance including Mark Macon, Tim Perry, Howard Evans, Mike Vreeswk, Derrick Brantley, Darrin Pearsall, Tom Katsikis, Ernest Pollard, Shoun Randolph and Jerome Dowdell. Every attendee walked to midcourt at halftime and received applause from the 3,867 fans at the Liacouras Center. The largest ovations, however, were saved for Chaney and Macon, an All-American who played in the NBA for seven seasons.

Anthony Stipa can be reached at anthony.stipa@temple.edu.