The fall of 1888 introduced to the world an entirely new phenomenon: the celebrity killer. London newspapers were

abuzz with latest developments in the hunt for “Jack the Ripper,” the mysterious serial killer whose story spanned national borders and oceans to become a tabloid sensation throughout Europe and America.

In the 120 years since the Whitechapel murders first captured the public imagination, The Murderer has developed into an almost iconic figure, both fascinating and repulsing all strata of society.

Slasher movies gross millions upon millions at the box office, murder mysteries regularly top the bestseller charts, and the TV airwaves are seemingly choked by shows like CSI: and its countless spin-offs and imitators.

With his latest book, The Anatomy of Deception, Lawrence Goldstone brings our obsession with murder full-circle, putting a CSI: twist on events that took place less than a year after Jack the Ripper terrorized London’s East End.
Drawing on his background in historical nonfiction, Goldstone presents a story that is at once entertaining, engaging and educational, taking readers on a sinister tour of the cobblestoned back alleys of 1889 Philadelphia.

Ephraim Carroll is a dedicated medical student at the University of Pennsylvania, whose only extraordinary achievement is his selection as one of the infamous Dr. William Osler’s personal pupils. The CSI: connection? Osler is one of the first American doctors to defy societal taboos through the performance of autopsies.

In his quest to expand the body of scientific knowledge, however, Osler stumbles across something far more grisly – and in doing so, draws Carroll into an almost Hitchcockian series of events beyond his comprehension or control. 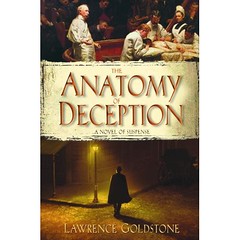 Soon, Carroll is moving in a world populated by both drug-dealing gangsters and Philadelphia luminaries like painter Thomas Eakins. As Carroll’s efforts inadvertently unearth more and more evidence, he is forced to confront his worst fears – and decide if he has the courage to face them down.

“Stunning conclusion” and “stirring climax” are both phrases that are tossed around fairly haphazardly in book reviews, but The Anatomy of Deception seems to beg the reviewer to use such terms. In a frenzied final 50 pages chock full of anatomy, intrigue and unwed mothers, the novel speeds toward a finish that will keep readers guessing until the final page.

There is no denying that The Anatomy of Deception is pure melodrama – but it is good melodrama, and period-accurate melodrama. Goldstone manages to combine the conventions of late-19th century literature with a modern readability, bringing 1880s Philadelphia to life with an almost lyrical prose style that provides a breath of fresh air in the often staid murder-mystery genre.

Goldstone’s unique command of language, history and suspense makes for a story that is something of a cross between Ragtime and The Shining. For lovers of mysteries, historical fiction, or the city of Philadelphia, this book comes highly recommended.