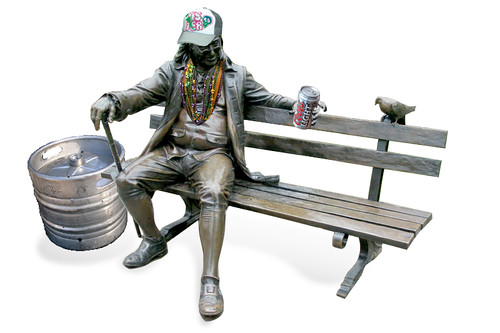 Most Philadelphians are familiar with the city’s biannual Restaurant Week, but this year, fans of festivals can embrace something new – Philly Beer Week.

From March 7-16, Philadelphia – which was recently named the best beer-drinking city in America by beer journalist Don Russell, otherwise known as “Joe Sixpack” – invites residents and tourists to taste tradition made within 50 miles of City Hall.

It will be an unprecedented 10 days with more than 100 events that celebrate Philly’s love for beer.

Most of the events are one day only. However, four events will run the entire course of the week. Most notable of these is “Bieres de Garde,” an event at the Caribou Café (1126 Walnut St.) that will allow guests to sample more than 50 different European beers. For $55, one can eat a traditional French dinner paired with a traditional French brew – and take in the Caribou Café’s classic bistro atmosphere.

Friday, March 7
Join Joe Sixpack at the official kickoff of Philly Beer Week at The Marketplace at East Falls, located at 3747 Ridge Ave. Sample special beers from 22 selected local breweries and brewpubs for $60 – and watch Mayor Michael Nutter tap the first keg at 7 p.m.
If that doesn’t appeal, save a couple of dollars and attend “Beer and Cheese: A Victorious Combo,” hosted at the Tria Fermentation School at 123 S. 18th St. For $50, one can taste Victory’s brews matched with different types of cheeses – a twist on the traditional idea of pairing wine and cheese. The event starts at 7:30 p.m.

Saturday, March 8
For $12, experience the South Philly Pub Crawl. At 6 p.m., head down to South Philly and check out some of its more famous bars: P.O.P.E., 1601, SPTR, The Dive and Ray’s Happy Birthday Bar. Pick up a ticket at one of the bars in advance. This will give you access to a free pint at each pub.

Sunday, March 9
Head down to P.O.P.E. (1501 E. Passyunk Ave.) for a free popcorn and movie night sponsored by Blue Point Brewing Company. Eat, drink and be merry while watching The Big Lebowski and Barfly. The event starts at 9 p.m.
Before that, check out Jose Pistola’s at 263 S. 15th St. From 11:30 a.m. to 2:30 p.m., Jim Meiers and Ed Friedland of Origlio Beverage will be hosting a $30 buffet-style brunch accompanied by Colorado-based beers.

Meanwhile, Old City’s The Khyber, located at 56 S. Second St., will host a “Bar Exam” at 8 p.m. This free event is a Quizzo challenge of beer trivia and, as the Khyber’s Web site states, a chance for teams to “pit their brains and livers against one another.” The Philadelphia Brewing Company will have four of their beers on tap, and will provide prizes for the Bar Exam’s winners and losers – and those who just want to drink.

Tuesday, March 11
Tuesday is “Meet the Brewer Night” throughout the city. Stop by different bars and pubs to meet those who make the beer Philadelphians love. Trolleys will run a loop between different drop-off points in Center City, Old City, South Philly and Northern Liberties. Beer lovers can purchase a “one and off” bus ticket to keep costs at a minimum – and make sure they hit all of the hot spots.

Wednesday, March 12
Tir Na Nog, located at 1600 Arch St., will host the “Sweet 16 of Beer” for $16 (that’s $1 a beer). The event is set up to mimic March Madness, but with beers – guests will sample more than 20 different brews and compare them to each other, and then see how their initial guesses about beer which would be better match up to the actual results. Selected appetizers will complement each of the three-ounce samples.

Thursday, March 13
Johnny Brenda’s (1201 N. Frankford Ave.) will hold the first Annual Philly Beer Geek Competition from 8 p.m. to 10 p.m. A panel of judges will challenge competitors on their knowledge of beer trivia, taste, philosophy and more. The grand prize is $1,000. To enter the competition, visit www.phillybeergeek.com.

Friday, March 14
Stop by the Bishop’s Collar (2349 Fairmount Ave.) for “The Bishop Gets Smutty,” an event featuring John Kevin Love of The Smuttynose Brewing Company. Starting at 7 p.m., guests can sample all of Smuttynose’s beers.

Saturday, March 15
Another event at the Tria Fermentation School gives beer-lovers the opportunity to listen to Armand Debelder and Dan Shelton talk about Lambic beer. This is a rare opportunity to learn about these very different fermented brews. The talk starts at 6:30 p.m. and costs $55.

In the afternoon, join guests at The Khyber for the Khyber Beer Chili Cook-off, which begins at 2 p.m. This is a free event and anyone who wants to participate is welcome.

With more than 400 different places to grab a beer in the city and more than 100 different events, Philly’s first Beer Week should prove to be nothing less than intoxicating. See the complete list of events, promoters and participants and www.phillybeerweek.org.