“Big Daddy” is the alias of McCargo, a Camden, N.J., native who won season four of The Next Food Network Star. McCargo beat nine other contestants to earn a six-episode series on the show’s namesake network.

That series, Big Daddy’s House, premiered in August and resonated with viewers. Its second season premiere is slated for January.

“I’m able to cook and teach people and enjoy it,” McCargo said. “It’s a big party.”

McCargo, 38, first got the cooking bug at the age of four through his mother’s Betty Crocker cookbooks. His parents encouraged him to experiment in the kitchen.

“I always had a big appetite for life and for food, but every time I looked at the table, it never seemed there was enough for me,” McCargo said, laughing. 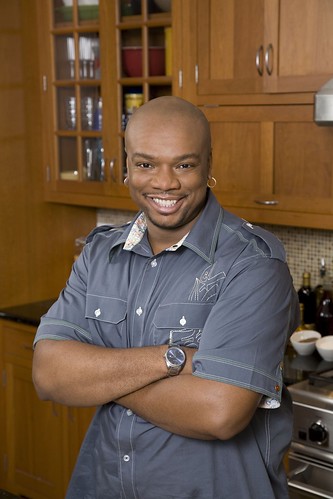 His parents recognized McCargo’s interests and talents and encouraged him to follow through with them.
“When I was seven, my dad told me I’d become a chef,” McCargo said. “I never knew what it was to become one until I did.”

After studying for a year at the Academy of Culinary Arts at Atlantic Cape Community College, McCargo worked at many restaurants in a variety of positions, from sous chef to executive chef of his own restaurant in Camden.

Most recently, he was the executive chef of catering at Thomas Jefferson University Hospital in Philadelphia. While working there, his wife pushed him to apply for The Next Food Network Star, and McCargo was chosen as one of the 10 finalists.

“I had a great job at Jefferson doing something I love to do,” he said. “But this is what dreams are made of, and you have to go for it.”

McCargo said he continues to keep in touch with the other contestants on the show, but would he do it again?

A panel of three judges, consisting of two network executives and celebrity chef Bobby Flay, chose McCargo to carry his own show.

“Aaron adds a burst of oversized personality to Food Network,” said Bob Tuschman, senior vice president of programming and production for Food Network. “His passion for big, bold flavors takes center stage in all his down-home food that our viewers crave.”

The six-episode run of Big Daddy’s House garnered more than 4.9 million viewers. Tuschman said the premiere was one of the highest-rated debuts for a cooking series the network has seen.

“Big Daddy got a big welcome from our viewers,” Tuschman said. “Viewers tell us that Aaron just makes cooking fun and approachable. He’s funny, he’s passionate, and his recipes are easy to recreate at home.”

It’s no secret that McCargo regards his family highly. His children – sons Joshua, 15, and Justin, 4, and daughter Jordan, who will be 2 next month – are frequently featured on his show.

“The boys are loving it,” McCargo said. “I don’t think it’ll be too long till they have their own show.”
Tuschman credits McCargo’s combination of expertise, pedagogy and “high-octane personality” as the reason for his success on Food Network.

“He had a warmth, generosity and likeability that endeared him to the judges, the viewers and even the other finalists,” Tuschman said. “In the end, that is in fact why his co-finalists gave him the nickname ‘Big Daddy.’”

McCargo’s is not a typical Camden success story. He found his achievements in a city once pegged as America’s most dangerous.

“I always tell people the three keys to success – a good prayer life, believing in God and myself,” McCargo said. “It’s having the great support from my church family and my immediate family and having a passion for what I love to do. And that’s cooking.”

He admits he’s not perfect – “I’ve been burning a lot of things in my life, and Big Daddy’s gonna keep burning things on the show,” he joked – but McCargo does give viewers a taste of his food and his life in every episode.

Twitter is a lot like my mother. I log in knowing I will find the answers to the questions that life throws at me. My kitchen sink is clogged again? @WomansDay lets me know the

Ashanti Dixon and her food truck team ‘The Breakfast Club’ are competing for $50,000 on the Food Network.