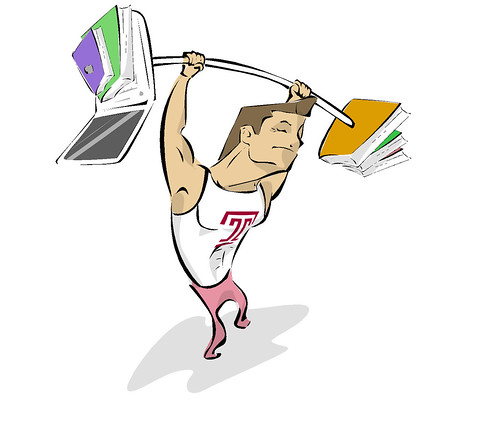 While many coeds spend their days going to class, hanging with friends, drinking to the wee hours of the morning, and surviving on a daily supply of cheesesteaks and Chinese food, a small group of Temple students dedicate their lives to building the perfect physique.

One such fitness enthusiast is junior kinesiology major Jennifer Montgomery, who has spent the past five months training to become a figure competitor under the National Physique Committee. This organization is the amateur league that bodybuilders and fitness competitors partake in before they receive their pro card.

Montgomery started training in July 2007 and competed in her first competition last October at the Gold’s Classic in Jackson, N.J. Montgomery recalled her experience the night before the competition, which took place in a hotel room with her trainer and another competitor. She prepared for her big day by applying a fake tan and eating salt-less, tasteless food.

At 7 p.m., she cut off her water supply in a process called water loading, which temporarily increases muscle definition. A week before competition, competitors drink large amounts of water. As the week continues, they gradually decrease the amount of fluids they take in until the day of the competition, when they drink nothing at all.

“When you wake up knowing you can’t drink anything, that’s all you want to do,” Montgomery said.

When she arrived at the Jackson Liberty High School, the room was full of nerves.

“I am a very happy person and I like to get excited,” Montgomery said. “Everyone was all so nervous and I was trying to cheer everybody up.” She decided to crack a few jokes.

“Yeah, no one was really feeling that,” she said.

However, anxiety had not escaped her completely. Before she made her debut on stage for pre-judging, she pictured herself wiping out in five-inch heels.

“I was more excited than I was nervous, because I was like, ‘Wow, I can’t believe I’m actually doing this,’” she said. “In the back of my mind I always knew that I wanted to compete.”

Her interest in fitness grew after she read an issue of Oxygen Fitness magazine. She started lifting with her dad in the eighth grade. During her senior year of high school, she developed a fracture in her spine and could not train for months.

“I was going nuts,” she said. “I would go and do pull-ups in the tanning salon so nobody would catch me.”

“I wasn’t doing anything,” she said. “I went back to running and it wasn’t fun anymore.”

For a year and a half, she refrained from engaging in any physical activity.

“I was completely and totally miserable,” she said. “Actually, I suffered from an eating disorder then as well.”
In her sophomore year at college, Montgomery was able to overcome her bulimia and started running again.

“But then I was diagnosed with hyperthyroidism, which makes it harder for you to lose weight,” she said.

After her boyfriend of three years broke up with her last March, she took some time out for herself and found a trainer – professional fitness competitor Stacey Simons from the International Federation of Bodybuilding.

When asked how she manages the dual roles of fitness competitor and student, Montgomery said it’s similar to the life of any student athlete. To prepare for a competition, she spends three hours a day working out before and after class.

DiSandro, who will compete for the first time in six weeks, said he prefers training in the summer because he has fewer responsibilities.

“It’s so much stress,” he said. “I have to study for anatomy, I’m missing meals, I’m having a hard time getting my gym in. If I know I didn’t lift that day and I have class, I will easily go to gym before class.”

Like Montgomery, DiSandro’s father first showed him the proper form of lifting.

“We always had to have weights around my house,” DiSandro said. “Now I’m teaching him what I go through, and he’s getting into it now.”

“I’d rather give my body what it needs to grow and be healthy than go out and get hammered,” said McHale, who is attempting to garner a sponsor to compete.

“I don’t know about being a pro,” McHale said. “That’s pretty extreme. I’ve seen guys that are pros and they talk about what it takes to get to that level and it’s real extreme.”
Instead of becoming a pro, McHale said he might pursue his goal of becoming a total body nutritionist, gym owner or supplement store owner.

“I’m trying to have a life and still look the way I want to look,” he said.

DiSandro and McHale also want to start a student organization called Bodybuilding Temple University. DiSandro, the president, said they already have 40 members and are looking for competition funding.

In addition to juggling classes and workouts, these students must follow strict, health-conscious diets.

“No junk food, no soda, no candy,” Montgomery said. “Basically, no added sugar.”

They eat all-natural foods, and among them are large amounts of vegetables and foods like oatmeal.

McHale said that if you want your body to grow, you have to eat every two hours – so he takes food almost everywhere he goes.
“It’s more of what you do outside the gym,” he said.

Although they boast a history that can be traced back to the ancient Egyptians and Greeks, bodybuilding and fitness competition are still sports that many people don’t completely understand, the bodybuilders said.

“A lot of people are shocked,” Montgomery said. “Like in my classes, they think its cool, but they really don’t know about it.”

DiSandro said that he and McHale might open a gym together in the future – for body builders only.

“When I go to the gym, I get really pissed off, because a lot of people are just fooling around, talking and stuff,” DiSandro said.

“In preparation for a competition there is no time to fool around. There’s no social time. There’s a lot of sacrifice,” Montgomery said. “There is no drinking, no nothing.”
“It’s a lot of work,” McHale said. “But I look at it as [though] I’m treating myself.”

Chesney Davis can reached at chesney.davis@temple.edu.