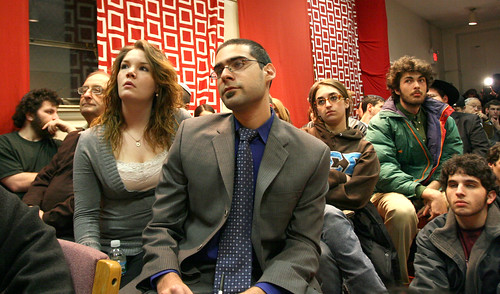 His son’s broken nose and fractured eye socket are healing, but the father of the victim of the recent hate crime said he worries about the emotional scars the incident may leave.

“My father survived over five years’ captivity by the Nazis. His boyhood days were in Auschwitz,” said the father of the 23-year-old victim, who spoke on condition of anonymity. “It hurt him tremendously to hear about this.”

His son, a senior at Penn State University, was visiting a friend at Temple when he was attacked by a group of students who allegedly used anti-Semitic slurs while beating him on Broad Street early Feb. 15.

Students, administration, professors, a representative from the Anti-Defamation League and Jewish community and campus leaders crowded into a small room at Temple Hillel on Broad Street Thursday to discuss the recent attack and ways to combat issues of anti-Semitism and discrimination on campus.

“This attack is an attack against all students at Temple University and the fabric of our community. This is what we are made of,” said Dean of Students Ainsley Carry, “Tonight we begin the healing process.”

Once the town hall-style meeting began, the stories of anti-Semitism poured out.

One student in the meeting recalled a time when other students threw her out of a party because she was Jewish. Another said she once received an e-mail through Blackboard promoting anti-Semitic propaganda on YouTube.

Still more spoke of anti-Semitic vandalism – from swastikas drawn into the snow on Jewish students’ cars to Israeli flags on cars being burned and stolen.

Anti-Defamation League representative Barry Morrison said he responds to anti-Semitism on college campuses often. Morrison said he credited Temple and Philadelphia Police and the administration with good communication, because Police Commissioner Charles Ramsey was aware of the incident not long after it occurred.

He outlined what the university can do to combat discrimination.

“Creating a sense of community is key and critical, and it has very practical dimensions to it,” he said. “By all means, this university and every other college or university has to take a get-tough, no-nonsense approach.”

He also called for an outlet for people to report acts of discrimination.

Carry said students can always report incidents through the Office of the Dean of Students.

“No matter how small you think it is, go ahead and bother us with it,” he said.

He said the administration will commit to establishing a process for reporting such incidents.

Jewish student leaders said they were satisfied with the turnout of the meeting.

“I thought tonight was very cathartic for many people. They were able to get so many things off their chests that had bothered them,” said Jesse Breitbart, a Temple Students for Israel member.

“I believe that coming forth from this is that this is now an educational point going forward that people should feel comfortable [reporting these things],” Breitbart said.

Judah Ferst, the program director of Temple Hillel who gave the opening statements at the meeting, said he thought the meeting turned out well and that he felt the administration really listened.

“This idea of having some form of transparent reporting process for any time of discrimination on campus is a wonderful idea and one that I hope Hillel can help take the lead on,” he said.
Temple Students for Israel president Andrew Schwartz said he was alarmed at the beginning of the meeting when a student raised the question of why they chose to hold it at Hillel, which was not “neutral ground.”

“I felt like some people probably were hesitant to speak,” the junior communications major said. “It was not my intention to speak first or to speak so loudly, perhaps, but when I saw nobody else getting up, I felt like somebody needed to open up the dialogue.”

He said many things have been brushed under the rug.

“That’s especially one of the things I think needs to be changed is just the rampant ignorance on our campus,” he said.

Laura Raimondo-Coffey, 47, a student at Temple Ambler and a close family friend of the Scott brothers, said she does not believe this is a hate crime.

“David’s not denying that he hit him, but we’re upset by the fact that they’re portraying these boys as hate-crime perpetrators,” she said. “If I thought they did it, I wouldn’t have come forward. I feel like no one is fully investigating this story.”

She also said that a witness has come forward and said that no anti-Semitic language was used in the attack.

Capt. Robert Lowell of Campus Safety Services, however, said Friday that it will continue to proceed in court as a hate crime.

“No one has come to us and said that they were there and this is not a hate crime. [This] probably [refers] to someone who was on TV, but they’ve never come to us,” he said. “If we went by every person who made statements that wants to remain anonymous, how do we know what’s true and what’s not true?”

After the meeting last Thursday evening, Carry said he hopes this incident will cause students to report their stories.

“I’m hopeful from this conversation because this is our first step toward healing, and sometimes, unfortunately, a community doesn’t pay attention to these things until something bad happens,” he said.

“It gave us the shot in the arm that we needed. I think we take our diversity for granted,” Carry continued. “Now it wakes us up and says we can’t take it for granted.”