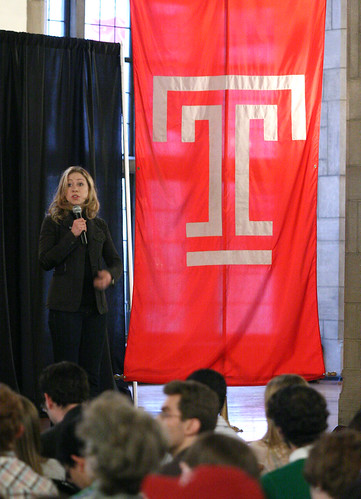 She addressed an audience of more than 200 students in the Great Court of Mitten Hall and answered as many questions as the hour allowed.

Students’ questions focused on world issues such as the ongoing genocide in Darfur and the war in Iraq.

Clinton said her mother would institute a no-fly zone over Darfur to combat the insurgents and the violence.

“My mother believes that there is no military solution to the war in Iraq,” Clinton said. “If she could, she would have ended the war yesterday.”

Clinton said the United States has a moral obligation to help the more than 3,000 Iraqi civilians who have sided with and aided the U.S. military. After taking office, she said her mother would begin pulling troops out of Iraq.

Ryan McCool, president of Temple’s College Republicans, wanted to know about Sen. Hillary Clinton’s military strategies but had one other very important question on his mind.

“I could make up a lot of reasons and explanations as to why I’m here, but what it all comes down to is that I am here tonight to get Chelsea Clinton’s phone number,” McCool said. “I think I can get it.”

When McCool put Clinton on the spot and asked her if she’d ever date a McCain supporter, he was sorely shot down.
“I’m very proud that my boyfriend supports my mom,” Clinton said as the crowd roared with applause. “Sorry.”

A more serious issue that was raised was healthcare and Clinton’s plan for universal insurance.

“As much as I wish that people who are uninsured today would never get sick that’s not true,” Clinton said. “Instead of people being able to go into the healthcare system when they need to they’ll continue to rely on the emergency room, which is the most expensive form of care.”

If elected, she said her mother would make sure everyone would be insured.

“I am really proud that more than half of my lifetime ago, my mom first stood up for universal healthcare coverage in our country before it was a popular topic,” Clinton said.

Malcom Kinyatta, a freshman theater major and self-proclaimed Clinton supporter, said he was thankful for the senator’s work on healthcare.

“My love for Hillary started back in 1999. My parents got divorced and my dad lost his job, so I didn’t have healthcare and the [State Children’s Health Insurance Program] was something that Hillary and other people championed,” Kinyatta said.

The health insurance program allowed Kinyatta to go to a doctor instead of the more expensive emergency room.

“That was something that directly helped me,” he said. “That is why I support Hillary Clinton.”

In January, the women’s tennis team opened their regular season with a pair of losses to Penn and Princeton. A week later, the Owls (12-4) picked up a 7-0 win against Binghamton. That victory initiated

When Adam DiMichele fell to the turf, many Temple football fans thought the season was lost. Not Vaughn Charlton.