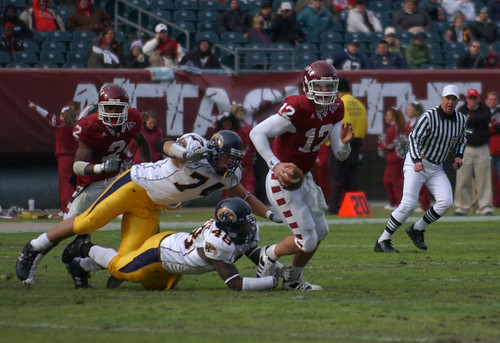 AMBLER — The anticipated dual between Temple’s No. 2 and No. 3 quarterbacks didn’t surface at the annual Cherry and White intra-squad football game this afternoon.

Sophomore Chester Stewart sat out the first half after injuring his thumb on White’s first play from scrimmage while his counterpart, junior Vaughn Charlton, led Cherry to an early lead and a 21-6 victory at the Sports Complex.

“I’m not having a party after the whole day,” second-year coach Al Golden said about Temple’s performance. The Owls finished with a 4-8 overall record and a 4-4 mark in the Mid-American Conference last season.

“I didn’t think the whole day was particularly great. I thought we showed in spurts the kind of competitive toughness that we’re looking for. But we’ve got to do it for four hours. This [game] was about an hour and 55 minutes from start to finish,” he said. “Today we were just looking at trying to get better.”

Charlton, the second-string signal caller who played in seven games last season after starter Adam DiMichele suffered a season-ending leg injury, went 13-for-28 for 209 yards. He threw two touchdowns connected with junior tight end Steve Maneri on a eight-yard score on White’s first drive to put the squad up 6-0 in the opening quarter and later hooked-up with senior wide receiver Bruce Francis on a 75-yard TD in the third quarter.

After Stewart left the game, red-shirt junior Colin Clancy stepped under center for White, completing four of his first five passes. He finished the game going 8-for-20 for 22 yards.

Despite Clancy’s efforts, the White squad never got the ball into the end zone.

White scored its only points on a fumble recovery that junior defensive end Brian Sanford retrieved in the end zone during the first quarter.

Stewart returned to the field in the second half for the White squad and, in his limited playing time, went 7-for15 for 123 yards while tossing an interception to senior defensive back Georg Coleman.

“We’re always cautious this time of year. We don’t want to let anybody get too banged up,” Golden said about sitting Stewart in the first half.

The Owls won’t suit up for another meaningful game until Friday, August 9 when they face Army in West Point, N.Y. in their season opener. Army defeated Temple, 37-21, in West Point last September.

Tyson McCloud can be reached at Tyson@temple.edu.

For more on today’s Cherry and White game, pick up this Tuesday’s issue of The Temple News and continue to check Temple-News.com and Broad & Cecil – The Temple News blog.

Positions on both sides up for grabs

The Owls defense will need to replace production from four starters – two linebackers, a tackle and a safety.

Charlton not golden in debut

Quarterback Vaughn Charlton threw three interceptions, and the offense committed five turnovers and missed a field goal in the loss.