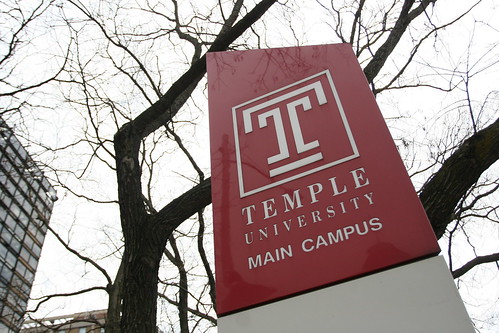 While its message gets across, the statue’s meaning may be lost for anonymous passersby.

The Planning and Design department helped students implement their gift ideas. Director Tom McCreesh explained the since-abandoned process of how each class left its mark on campus.

“A class gift was intended to be some physical improvement to one or more of the university’s campuses,” he said. “Ideally, this would be some object for the use or enjoyment of future students that could be credited to the class which gave the gift and which would endure for a long time.”

In order to implement gift ideas, the department worked directly with students in a set system.

“At the start of the spring semester, the Office of Planning and Design would send a memo to the dean of each college asking for one student representative to participate in their Class Gift Committee,” he said. “The Class Gift Committee was to be run, as much as possible, by the students themselves.” 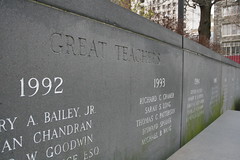 Although a chosen committee of students proposed gift ideas, the general graduating body did not necessarily know where part of their graduation fees ended up.

Erica Siate, associate director of Developmental Support Services for the Office of Institutional Advancement, has recently taken on responsibility for an updated direction of charitable funds given to Temple.

“There was a fee for students – a fee when you first registered – and it became the class gift, so a lot of people didn’t even realize that that’s what it was,” she said.

Ranging from bike racks and display cases to courtyards and gardens, the markers pepper Main Campus. Some are intricately designed. However, some creations weren’t a practical option for installation.

“Most times, the students had no idea of how much things cost and would make suggestions which would cost far more money than the funds available,” McCreesh said. “Planning and Design would also advise the students on building code issues and anything else that might affect the practicality of a class gift proposal.”

Complications hindered some markers from being completed, and some have been demolished with the buildings they were once a part of.

And although they are built with good intentions, some markers invent their own problems.

“In one example I heard, the seniors wanted to donate a fish tank for the Student Center, and it was all fine while there were funds, but then the funds ran out,” Siate said. “And they didn’t have any money to feed the fish, so they had to come up with money to keep the fish alive.”

The graduating classes of Temple’s future need not worry about fish dying in the Student Center. A group of seniors has not designated a marker project for five years.

“The tradition ended after the Class of 2003, after someone questioned the process of the class gift,” McCreesh said.

Temple has since revamped its giving energies.

“We don’t really think it’s the best idea for Temple to do that anymore,” Siate said. “So basically, what we want to teach students through the Class Pride Campaign is that charitable gifts make a difference here at Temple and they’re a big part of how Temple runs.”

A shift in direction away from the marker tradition seems to be the trend for many other universities.

“A lot of universities are moving away from class markers,” she said. “Universities where it’s a heavy tradition, like Penn, they still do it, but some schools have come up with problems.”
The entirety of the tradition’s run is a bit elusive, reaching back to an age before Temple’s Alumni Circle at Berks Mall and Liacouras Walk.

“The tradition pre-dated current Planning and Development members, and ended after the 2003 class,” McCreesh said.

Part conversation piece and part student legacy, Temple’s Alumni Circle is one of its better-known markers. Built by the Tyler School of Art’s architecture Class of 1989, the elaborate memento was designed as a miniature amphitheater.

Those who stand in its center can hear their own voices echoing back toward them. The semicircle of brick bordering the circle was also built as a whisper wall, through which students can communicate.

The large, swollen face of Alumni Circle’s owl overlooks the commotion near the center of Main Campus, much like a lingering sentiment from Temple’s past – the stone emblem is a reminder that the Temple family extends far beyond the realm of students walking through campus each day.

Postmodern literature with heart and humor

Authors, like members of any other profession, have their own quirks and specialties. For instance, Dickens was particularly good at crafting memorable characters, while Hemingway is worth reading for the sound and rhythm of his