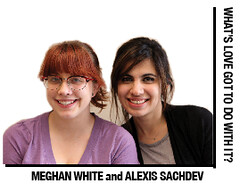 Columnists Alexis Sachdev and Meghan White reflect on the myth of the “friend” zone.

Meghan once worked with a boy named George. He was perfectly sweet and nice – a great guy – however, she was not romantically interested in him. He proceeded to tell her best friend about his feelings for Meghan in hopes of reciprocity. But if there was any potential of her having romantic feelings for him, they were null after he didn’t have the courage to declare his feelings to her at the risk of “ruining our friendship,” or whatever the excuse is.

To all the “nice guys” out there like George, you’re not a nice guy. You exalt yourselves above your fellow men as the shoulders for women to cry on and praise yourselves for listening to our often-incessant talking. When the object of your affections says she wants someone funny, sexy, smart, successful or well-dressed, you automatically believe you fit the bill. And if you have to say you’re a nice guy, you’re not fooling anyone.

You seek rewards for the so-called labors of your friendship. But this is not friendship, this is a villifying game rather than something built off mutual trust and respect. You treat the relationship as an arcade game, seeking kindness points as tickets in return for sex.

This is the friend zone, and it’s bollocks.

Some months ago, someone Alexis had considered a friend claimed she had friend-zoned him after she showed the hots for another man in his presence. However, this “friend” had never previously – or at least soberly – told her that he had romantic feelings for her, but had the expectation that his actions under the guise of friendship would lead to something more.

You are not owed anything for your friendship. Claiming that you’ve been “friend-zoned” voids our right to feelings. You are one of the worst offenders of misogyny, believing you are entitled to sex and/or romantic feelings as some form of payment for your time and energy.

If we have not reciprocated your feelings, have we then wasted your time? This mentality suggests that you only pursued our friendship in hopes of getting what you desire, but it begs the question: If you receive sex or romantic affection in return, was our friendship valueless to you?

A double-standard of heteronormative dating patterns enters the consciousness at the acknowledgement that there is no female version of the “friend zone.” Generally, women do not hold similar expectations for their friendships. If a man were to reject his female friend’s advances, she would either deal with it in the friendship, or leave. But nowhere in this situation does the average woman disparage her male friend, claiming he “owes” her anything in return for her friendship.

Nice guys don’t finish last. They don’t finish first. They don’t lose to the jerks or come out winning as the underdogs in the end. Sure, every woman appreciates having a strong group of supportive friends surrounding her, but if you’re in it for the wrong reasons, you’re anything but the nice guy. You’re a wanker.

So instead of complaining that you’ve been friend-zoned, accept the fact that maybe this woman is just not that into you. It doesn’t mean you’re not right for someone else, but you can’t force yourself upon someone who doesn’t reciprocate the feelings. A real friend would respect her interests and stop giving the genuinely nice guys a bad rep.

Alexis Sachdev and Meghan White can be reached at living@temple-news.com.