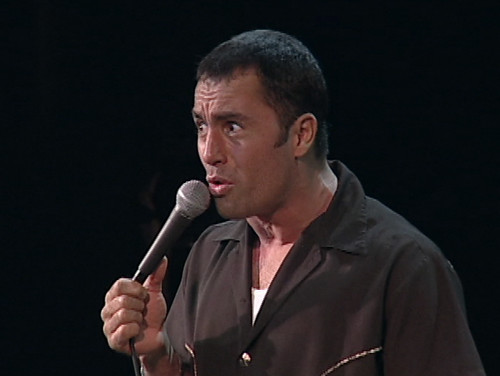 Joe Rogan is a stand-up comedian whose list of achievements is a long one. In addition to his stand-up work, he has hosted the The Man Show and commentated cageside as mixed martial artists punch, kick and elbow the sweat out of each other at the Ultimate Fighting Championships.

A brown belt in Brazilian Jiu-Jitsu himself, he is well-versed in choke-holds and joint-locking techniques. But he also admits to smoking enough joints to parallel the number of animal body parts that contestants have gagged on in Fear Factor, which he hosted.

His passion, however, has always been making people laugh.

“The biggest misconception about me is probably that I’m not funny,” Rogan said. “It’s a weird thing for someone to be a cage-fighting-commentator-slash-stand-up-comedian.”

Alien encounters, psychedelic drugs and conspiracy theories are among some of Rogan’s more frequented topics. Eyes wide as he rants, he fires off punch lines and factual support like a one-two blow to the collective funny bone of his audience.

His has a zeal that few of his contemporaries possess and a skill that he has honed since he first watched Richard Pryor’s Live on the Sunset Strip when he was 15 years old.

Rogan has since moved to Los Angeles and learned from his experiences in hostile territory. He has a wit that rips into hecklers and drunks like an X-acto knife, but ultimately, he is professional.

“I’m telling you this because I love you – you’re being ‘that guy,’” Rogan said to a shirtless drunk in one of the videos featured on his Web site,
www.joerogan.com.

Rogan said that he tries to perform once every weekend, but only gets to the East Coast once a year, which is why he is excited to perform at Helium Comedy in Center City from April 3 to 5. This stint will mark his first time performing at Helium Comedy.

“Philly is a no-bulls— town, which is what I like. It’s very much like Boston, which is where I grew up,” he said. “I think that there’s something about East Coast weather and East Coast people being the descendants of the first immigrants who came to America that just makes them heartier people.”

The Internet has become a tool for Rogan to reach out to audiences across the globe. He operates a blog, sends out a regular newsletter via e-mail, and has begun orchestrating video chats with his fans. His Web site is sprinkled with video packages, including footage of his onstage confrontation with Carlos Mencia over Mencia’s joke-stealing antics to Web casts.

“When I write for my online blog, that also helps my stand-up comedy, because it’s all stuff that I’m interested in, and some of those things become bits. And then when I work out I do yoga or jiu-jitsu. It’s all clearing my mind for my comedy,” he said. “That’s the beautiful thing about my life at this point, it all goes together.”

Rogan said he also floats around in an isolation tank to clear his mind, because it induces a psychedelic experience in a safe environment without having to take any drugs and risk a bad trip. He recently bought a new one and is giving his old tank to a subscriber of the Rogan newsletter in June – as a sort of strange raffle.

“It would raise awareness and get more people involved with using isolation tanks,” Rogan said. “It’s an unbelievable tool for introspection and it’s a very rare and relaxing experience.”
Being Joe Rogan probably requires a lot more discipline than one would assume – he just makes it look easy because he’s having a great time. Negativity is one distraction that Rogan steers clear of during his adventures.

“The one major philosophy that I live by is to just be positive, and make sure you’re doing what you want to do and what you think you are supposed to do,” Rogan said. “If there are negative people or negative situations that you come in contact with and they cannot be [remedied], then just cut them out of your life.”

RooftopComedy’s search for the funniest college students in the country makes a stop at Temple.