Columnist Meghan White teaches readers how to keep their drinks hot and their hands cool with a coffee cup sleeve.

This week I messed up. I didn’t mess up a lot, but I messed up enough that it was frustrating. No, don’t worry–you still get your craft. I know you were very concerned.

This week, in honor of Lunchies and my love for coffee, I decided to make a reusable felt coffee cup sleeve. You know, a felt version of those cardboard sleeves you slide over your coffee cup, so you don’t scorch your hand while chugging down coffee. I can’t be the only one who has hands that just can’t take the heat.

I also decided to embroider said sleeve. Lacking transfer paper, I put my brain to work and decided to use regular computer paper and spray adhesive to attach it to the strip of felt. I should have followed the directions and tested it out on a strip of test fabric first, but I didn’t.

After waiting five minutes for the spray adhesive to become–as the can assured me– removable, I slapped the computer paper pattern onto my felt. All went well while embroidering. In fact, it was super easy and my fingers didn’t get sore holding the pattern in place. But when it came time to remove the pattern I was left with a mess.

It became a wet, destroyed mess of felt, paper and embroidery floss when I decided that running the felt under the faucet would help remove the paper and the adhesive, which actually did the opposite of help. Still, I tried in vain, pawing at the felt, hoping I could use it for the craft.

I learned my lesson. And despite what the can said, my spray adhesive is now only going to be used for more permanent applications. It is also never going to go on fabric because, despite again what the can said, when you want it to permanently adhere to fabric it tends to do a mediocre job.

Even with this setback I think I came up with a fairly nice felt cup sleeve. It’s embroidered, but not with what I had intended it to be.

Hopefully, if you make it you can find use for it, whether you’re trying to not burn your hand on a Starbucks cup or you’re busying yourself by testing all of the coffee spots on Main Campus.

Optional supplies—if you want to try your hand at embroidery: embroidery floss.

1. There should be a seam on your cardboard coffee cup sleeve. Try to pop it open at the seam without completely destroying the shape.

2. Use the cardboard sleeve as a pattern. Pin it to your felt and cut out two pieces. I chose to use two contrasting colors and cut one slightly larger than the other for extra contrast.

Optional step: Decorate what is going to be the outer piece of your felt. For me this was my smaller piece. I opted to embroider “DEATH BEFORE DECAF” on it using a split stitch.

3. Use a piece of tissue paper or computer paper as a pattern and pin the design to the felt. Then embroider and remove the paper once you’re done.

4. Stitch the two pieces of felt together. I chose to use embroidery floss so the stitches would have more contrast and be chunky and more visible.

5. Wrap the sleeve around the coffee cup and pin where it should be attached in order to slide on and off of the cup. Then, get to stitching.

6. Slide your finished sleeve around a hot coffee cup and enjoy. 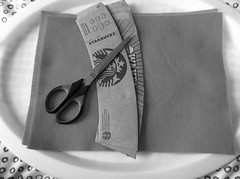 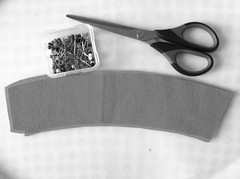 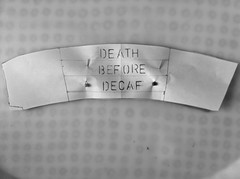 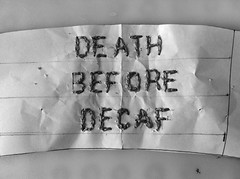 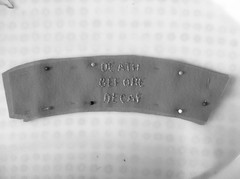 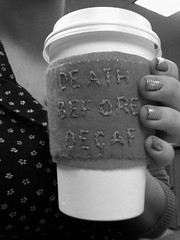