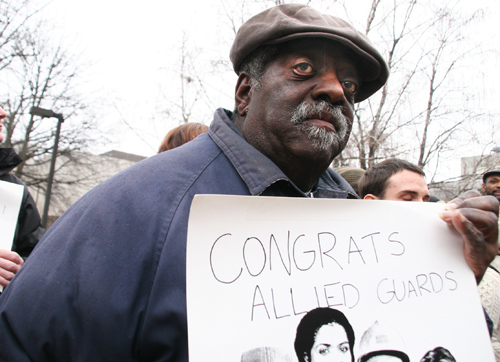 It was a celebratory moment for Temple security guards and activists in what they called a small victory in the battle for fair treatment and benefits from employer .

Members of the Student Labor Action Project and Jobs with Justice gathered on Liacouras Walk Tuesday for a press conference after reaching an agreement.

The deal, worth $1.5 million, according to JWJ, will allow Temple security guards up to three annual paid sick days, effective Feb. 1. The announcement came after the University of Pennsylvania granted their security guards the same amount of sick days and increased patrolling guards wages from $9.15 an hour to $15 an hour in early December.

SLAP and JWJ had been pressuring Temple for five paid sick days since 2005, said Fabricio Rodriguez, director of JWJ. But the university communications department continually released a statement disassociating itself from the matter stating, “This issue is between AlliedBarton and its employees,” which had been former President David Adamany’s stance on the issue.

“Temple was intransient,” Rodriguez said. “They weren’t going to move.”

Rodriguez said organizing the guards was the first step in reaching the new agreement. He also said President Ann Weaver Hart was willing to listen to the activists’ complaints.

JWJ and SLAP both argued that Penn and Temple could exert pressure on AlliedBarton to bring about the labor changes.

Following the agreement, William Bergman, vice president for operations of Temple, released a statement through the office of news communications confirming the agreement.

“These paid sick days are in addition to 10 paid vacation days that AlliedBarton guards already receive after three years of service, which also may be used for absences due to illness,” the statement read in part.

Inadequate work conditions and unfair labor practices are among many of the complaints that continue to be levied by JWJ and SLAP against AlliedBarton.

Thomas Robinson, a junior social work major at Temple and a security guard at Penn, said the organizations will begin negotiating for health care and quality wages.

George Darrah, a former Penn security guard, claims he and four other Penn guards were suspended and transferred by AlliedBarton after efforts to unionize workers. Though Darrah completed an 11-year stint with AlliedBarton, he still works with JWJ pushing for a union.

“[A union] is terribly needed, with the way they pay people,” Darrah said. “With the benefits package, the guards would’ve had to pay so much that they couldn’t afford the insurance.”

Penn officials declined to comment on the new agreement.

Renita Burns can be reached at renita.burns@temple.edu.