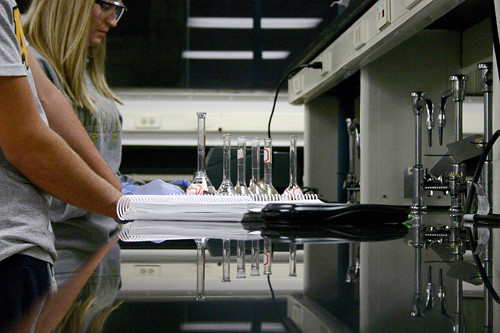 With a new dean and support from Temple, the College of Science and Technology is  updating its antiquated laboratories and infrastructure.

The Board of Trustees approved $2.9 million-worth of renovations to the college in October. The funding is part of a push to attract more professors to the school and support those already teaching.

A large amount of the money is going toward changes to the fourth floor of the Biology-Life Sciences building. The building is getting new equipment and expanding some lab spaces.

Upon arriving at Temple a year ago from the University of Pennsylvania, dean Hai-Lung Dai made hiring additional research faculty a primary goal.

“Our faculty strength has been under in comparison with universities of a similar nature,” Dai said. He said the college aims to hire 20 to 25 more faculty within the next three to four years.

“We are putting in facilities that support teaching and research,” he said.

Most of the changes will be infrastructural, but classrooms will be equipped with smart carts.

Dai said he wants the changes to encourage research from faculty and students.

“Students need to know discoveries are made every day, and people teaching them are on the vanguard of those studies,” Palladino said.

Christa Drew, a sophomore biology major, said she’s looking forward to the long overdue renovations, but she is worried about the hiring of new research faculty.

“I’ve had at least two researchers, and just because you are an expert at the field doesn’t necessarily mean you are a good teacher. But I think [the addition] might expand the courses that are available,” Drew said.

Lalinda Palliyaguru, a chemistry teaching assistant, commended the changes to the college as long as it does not restrict access to equipment, he said.

But he added that some professors should be more focused on mainly teaching. “Sometimes students complain about professors not having time,” Palliyaguru said. He said it might be ideal to have more professors specifically for teaching.

The school is also conducting a study with an architecture firm to decide whether or not CST should be rebuilt after a report about the school found it inefficient to continue renovating.

Palladino said the report concluded that if the school were to construct a new building of the same size, it would cost $67 million, of which the school has already put up $50 million, which is non-refundable.

He said it would cost $35 million just to make state-of-the-art renovations, more than half the money it would take to construct an entirely new facility with all the departments located in the same building.
Though, these plans may be in the distant future, Palladino said the report on how the school should be rebuilt will be ready within the next six to eight months.

“We need to identify the precise needs and the cost of meeting those needs,” he said.

Renita Burns can be reached at renita.burns@temple.edu.