The TUSM dean will step down from his position no later than June 2012.

School of Medicine Dean Dr. John M. Daly announced he will extend his deanship until June 30, 2012.

Daly is an internationally renowned oncology surgeon, author, researcher and academic. He will remain part of the faculty as a professor of surgery.

Daly said it is a “good time” for him to leave his current office, as the School of Medicine is “doing well financially and from an academic perspective.”

When Daly began as dean in 2002, the school was on a probationary status with the Liaison Committee on Medical Education, the nationally-recognized accrediting authority for medical education programs, and the morale of the faculty and students was “quite low,” Daly said. 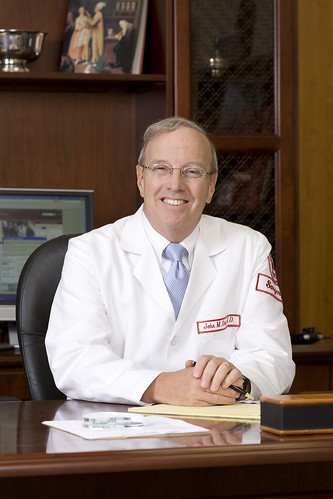 “Many of the researchers, as well as clinicians, had left the medical school over the preceding four or five years,” he said.

TUSM is currently an accredited eight-year program and, since 2002, has undergone several changes due to what Daly referred to as a “reinvigoration of the mission and vision.” In addition to the revision of curricula for medical and graduate programs, the school recruited more than 400 new faculty members and 20 new department chairs, division chiefs and research center directors.

Helen Pearson, the associate dean of faculty development and associate professor of anatomy and cell biology, said Daly’s time as dean has been successful.

“There’s been a large number of faculty recruited during Dr. Daly’s tenure as dean, providing an influx of high-quality clinicians and researchers,” Pearson said in an e-mail. She also highlighted Daly’s “clear vision for the school and high expectations for the faculty and Dean’s staff.”

Pearson said Daly’s most significant contribution to the School of Medicine has been his role as coordinator of the Medical Education and Research Building project.

The new building, which opened last October, created close to 250,000 square-feet of flexible, state-of-the-art lab space. Costing $163 million, the building is the largest capital improvement project in the university’s history.

“I know from what I’ve heard before that there have been a lot of good changes since [Daly]’s been here,” Pugachevsky said.

The School of Medicine is attracting students with better grade point averages and MCAT scores than preceding classes, who collectively rank above the national average. There were 9,886 applications to fill 180 positions for the Class of 2011, an increase of 17.5 percent from the previous year.

Daly said the leadership of the faculty has allowed for annual funding to increase. The research faculty has seen its funds increase from about $32 million to $58 million last year, and Daly expects this fiscal year to reach as much as $75 million in annual research.

“I think he had a big part in trying to teach us and show us who he was,” Trautman said.

After he steps down, Daly plans to teach medical students and residents, revitalize his research interests and help with the new dean’s transition.

A Philadelphia native, Daly received his M.D. from TUSM in 1973.

Daly said the time for the interim process to begin is still unknown, but that the new candidate should possess leadership, a background in academic medicine and an understanding for the mission of the medical school.

“I have a passion for Temple, having graduated from here and now having worked hard to try to see it become more successful,” Daly said. “I look forward to doctoring again.”

Connor Showalter can be reached at connor.showalter@temple.edu.