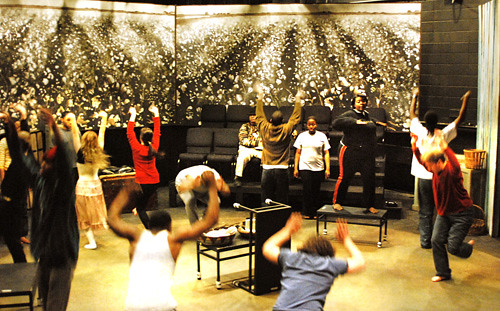 Temple’s next theater production – The Darker Face of the Earth – explores gender roles, race relations and tolerance in the context of a 19th-century American cotton plantation. Although the play is set more than 150 years ago, its message is still pertinent to Temple students and the Philadelphia community today.

Written by black poet Rita Dove, poet laureate of the United States from 1993-1995 and winner of the 1987 Pulitzer Prize in poetry, the play is under the direction of professor Charles Dumas, a former colleague of Dr. Martin Luther King, Jr.

Dove’s play examines relationships – among slaves, between slaves and owners, and between men and women. She explores gender role reversal and racism of the past and present.

“This play looks at black and white, women and men, slave and master, and love and hate,” Dumas said. “The message is still relevant. Certainly, we haven’t overcome these complex problems.”

The Darker Face of the Earth centers on the love affair between plantation owner Amalia Jennings LaFarge, played by senior theater major Elena Bossler, and slave Augustus Newcastle, played by theater major Damon Williams, and the repercussions of their actions.

“This play is a beautiful piece full of poetry, and it is an important piece to do – not just for African Americans, but for all people,” said senior theater major Joy Notoma, who plays Phoebe, a young slave woman who falls in love with Augustus.

In writing the play, Dove creates an interesting role reversal. Instead of a white male plantation owner having an affair with a black slave woman, Dove bases her story around a female owner and a male slave. Through the reversal, Dove examines relationships between men and woman in an unusual way.

“People say, ‘Once a black man establishes himself, he overlooks black women to start a relationship with a white woman or an Asian woman,’” Notoma said. “This experience has really made me think about the relationship between black men and black women. Augustus is a black man who has seen the world, and he chooses Amalia, a white woman, over Phoebe. Phoebe stands by him, but he goes elsewhere [to Amalia] to find a partner.”

Dove brings a distinctly modern voice to the slaves.

“For once, the Temple community will be able to look at slaves and see real people,” Notoma said. “We have a general idea of what a slave is like, but slaves are our ancestors. They didn’t have the voice that we have.”

Some language and situations may shock audiences, but the actors deal differently with the violence and racist language.

“It took me a while to overcome the ‘big word,’ ” junior theater major Josh Bernaski said. “I’ve had to get over that aspect and adopt the mindset that Louis is a character.”

“The language in the play doesn’t hurt Phoebe in the same way that it hurts me,” Notoma said. “I recognize it as a part of my world as Phoebe, and Phoebe is used to hearing it.”

Although it is difficult for Bossler to accept Amalia’s actions, she is able to separate herself from the character.

“In some ways, the strong language is good because the other actors’ reactions are honest,” Bossler said. “In one scene, I have to use a whip. In order to go through with it, I have to set aside who the character is and who I am.”

Despite the actors’ initial discomfort with the play’s racist language and situations, the cast members have learned to trust each other.

“In this short amount of time, the cast has bonded,” Bernaski said. “It helps that we are an ensemble cast. We are all on stage the whole time.”

The show will be held in the Randall Theater, an intimate black box set within Tomlinson Theater. At the beginning of each act, the cast members enter together and never leave the stage. When they are not a part of the scene, they sit to the side and work together to make sound effects and sing spirituals.
“I feel comfortable with the cast,” Notoma said. “I know them all and trust them.”

Bossler, who was out of the country performing a one-woman show in India called Anatomy Lesson, had a different experience.

“Before I left for India, I became closer to the cast, especially the lowerclassmen,” Bossler said. “It was hard when I came home, because my understudy had been filling in for me while I was away. I felt distanced.

“But I had to keep that distance,” she continued. “Amalia is at a distance from the other characters.”
For Dumas, director of acting in media in the School of Communications and Theater, The Darker Face of the Earth is a very personal project.

Dumas marched with King, listened to his Aug. 28, 1963, “I Have a Dream” speech in Washington, and spoke with King at a 1967 Florida conference on poverty. In 1997, he performed in the New York premiere of The Darker Face of the Earth.

“Charles has helped me to see slavery isn’t that far in the past,” Notoma said. “His great-grandparents were slaves. He reminded us that all the civil rights work he and his peers did was a response to slavery.”
Dumas said the “American dream” is part of a classless society.

“Working class people settled America,” he said. “We never had aristocracy, but this stupid slave system brought about a self-degenerating mentality. Racism is illogical and irrational, but it’s there. We can look at it.”