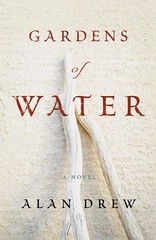 In the days, weeks and months following the terrorist attacks of Sept. 11, 2001, television and radio pundits pondered the effects that the horrific events of that day would have on countless aspects of American life: politics, economics, travel, shopping – the list goes on. Few commentators, however, took the time to consider how it would affect the literary world.

During the past few years, an ever-increasing number of publishers have pumped out a spate of books dealing with the Islamic question, East-versus-West issues, the role of religion in contemporary society, post-9/11 morality and countless other related topics. For better or for worse, the American reading public is more interested than ever in learning about the Islamic world.

Add Gardens of Water to the rapidly-swelling ranks of these East-versus-West accounts. The ambitious debut from novelist Alan Drew is set in Istanbul, a city literally straddling the East-West divide. The novel seeks to examine the major global issues of our time from a highly personalized viewpoint: through the tale of Sinan Basioglu’s struggle to hold his family together in the wake of natural disaster.

Gardens of Water is the story of how two families – one American (Roberts), one Kurdish (Basioglu) – endure together in the aftermath of a horrendous earthquake that transformed their suburban Istanbul homes into a smoking heap of rubble. The novel’s first few chapters appear to be the start of yet another post-9/11, Muslim-American literary lovefest; however, the book quickly takes on a darker tone as Drew attempts to wrestle with issues beyond the limits of most fiction written on the subject.

At first, Drew seems to employ the most cliché of post-9/11 literary clichés  – the blossoming of love between youths from both sides of the sociopolitical and religious fence, who are seemingly fated to surmount the boundaries they might face. But he quickly describes the unassailability of these barriers, despite the wishes of all involved to see them come crumbling down.

“He was tired, so tired,” writes Drew of Sinan Basioglu. “And he was sick of fighting a war – a long, old, futile war that was over now anyway.”

Gardens of Water ends not with the hopeful climax of many similar works, but with a strangely unsettling ambiguity (that may be as much a product of a young writer’s inexperience as a conscious effort to reflect uncertainty’s presence in modern life).

Drew’s descriptions of Istanbul and the earthquake are highly detailed and extremely captivating. And no wonder: the author had arrived in Istanbul just four days prior to the deadly 1999 Marmara earthquake. In drawing on his own experiences, the author is able to create a truly captivating portrait on the land he so clearly loves.

If nothing else, Alan Drew’s Gardens of Water is commendable for its attempts to reach beyond the clichés employed in many other contemporary novels on the east-west divide, and for Drew’s hauntingly beautiful descriptions of post-quake Istanbul. For readers interested in a nuanced portrait of the Islamic world, Gardens of Water is an ideal read.