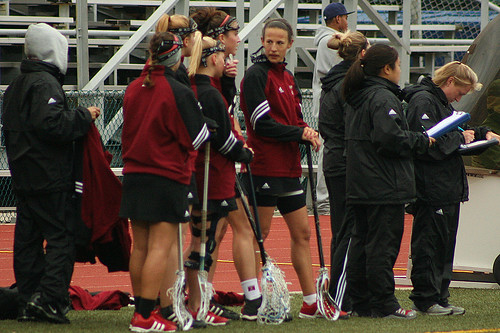 She shoots and she scores.

It’s a familiar phrase these days for the women’s lacrosse team, which, through Sunday, is converting 50 percent of its shots — up from 36.1 percent a season ago — to lead the Atlantic Ten Conference.

“I think the tempo of our game leads to taking smarter, easier placement shots as opposed to last year, when we were more run-and-gun it,” sophomore midfielder Chelsea Rosiek said.  “This year, there’s maturity and people are willing to be patient, settle it down, and feed off each other.”

Building on last year’s numbers, when they put up .545 and .483 shooting percentages, respectively, Rosiek and Caniglia have converted 58.8 and 63.4 percent of their opportunities this season, good for the two highest spots on the team based on 30 or more shot attempts.

“Nicole has arguably the best shot on the team,” coach Bonnie Rosen said.  “She has a great ability to place the ball with power when she has time and space. So when she has a free look at the goal, it goes in.”

“And Chelsea’s done a really nice job this year of knowing where she scores from,” she said.  “It’s been the combination of them doing what they can do well and teammates recognizing when to get them the ball.”

That recognition comes not only through spending extended periods of time together on the field, but also from pouring over pregame scouting reports on defenses and goalkeepers.

“We go over goalies’ tendencies before the games and figure out where their weak points are and where they’re more prone to getting shots put by them,” Rosiek said.  “We think of that first when it comes to our shot selection.  And then we’re not going to shoot if someone’s in front of us defender-wise. Then there’s knowing your strengths and weaknesses as a shooter.  If it’s not your strength, it’s probably someone else’s.”

Rosen said it’s that ‘unselfish’ attitude of the players that is most responsible for the Owls’ shooting and overall offensive success.

“We recognize that a lot of people can score,” Rosen said.  “Anybody can shoot. We’ve learned that not all shots are good shots.  And so we’re willing to work to have people understand their roles to know who can do things at different times.”

Maintaining that chemistry is just one of the “little things” the Owls need to do to continue their winning ways.

“Really, it ’s the behind-the-scenes things that have led to that shooting percentage – our ability to come up with draw controls, make the stops defensively, possess the ball into our attacking end to give ourselves a chance to work a patient offense,” Rosen said.  “It’s not the fact that we shoot that well, it’s that everything else is going well to enable us to shoot.”

A look back at Temple University’s most successful coaches

The Sports Editors at The Temple News honor the paper’s 100th Anniversary of publishing by reflecting back on the coverage of coaches who found success in Temple’s sports programs.

Apple. Indiana. Jagger. Dweezil. Moxie Crimefighter. No, these aren’t a few of my favorite things. Rather, they’re proof that babies born to celebrities don’t have a shot in hell when it comes to “standard” names.

Temple will run a clinic for the classes of 2019-23 high school graduates at Howarth Field.