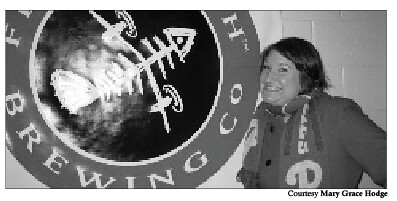 “I love Shock Top – definitely one of my favorite beers,” said Frank Michaels, a student sitting at the bar Bob and Barbara’s on South Street. The woman sitting next to him turned and made a face.

“I mean, I like Blue Moon, too,” said Michaels, as he tried to defend himself.

“I’Il stand by my original statement,” the woman continued with a sarcastic smile.

Not your average beer connoisseur, she is somewhat of a Jedi Master, with expertise in multiple areas, always looking for ways to be the mentor.

Today, she serves as a brewery representative for Cherry Hill, N.J.-based Flying Fish brewery, where she said her job is “all about brand and relationship maintenance.”

“I want to ensure that our brand is being promoted well, which includes participating in and the planning of events, both large scale and small,” Hodge said.

But while she is currently fulfilling her passion working in Philadelphia’s beer industry, Hodge took many sidesteps on the way there.

Raised as a “true southern girl” in Alabama to a Presbyterian minister and teacher, Hodge said she was raised in a religious household.

While she said she is proud of her heritage and upbringing, she needed a change when it came to looking at schools. This brought her to Drexel University, where she studied marketing and minored in German. Far from Texas, she took her open mind and open heart to the dormitories.

“I met as many people as possible,” she said. “I was used to southern hospitality, so I just naturally tried to be friendly with everyone.”

It was after graduating from Drexel that Hodge said she began to find herself. After working through a Fulbright scholarship to teach English in Germany, she moved back to Philadelphia and began her graduate work at Temple in 2009 in tourism and hospitality management.

In addition to her coursework, Hodge was hired as the graduate extern for student activities. This essentially meant being a resident assistant with different student organizations.

Hodge said she felt at home both in the Office of Student Activities and in the hospitality industry. It was at Temple where she began her work in event planning, and discovered her true life’s passion.

It started in her applied research class, where she decided to write a paper on craft beer. The paper “focused on the increase in popularity of craft beer in Philadelphia as it connects to something more local and authentic,” Hodge said.

She took her southern hospitality into the city once again, this time to the bar scene. She ended up landing an internship with the Beer Lass – a blog that covers food and beer in the city – and loving it.

“It was an epiphany,” she said. “Everything about it – it just became what I was meant to do in my life.”

Hodge said she loved interacting with people, being knowledgeable about the industry and was thirsty for more. Her thesis turned into a question of why people went to beer events, and she conducted multiple studies at different bars throughout the city. Some events were large, some were small. Some people treated it like a wine tasting, others just wanted to get intoxicated.

All came for different reasons, but it was at the smaller events where she found those who were passionate about learning about different types of craft beers. Then, she said she realized that beer was very much like any other field that develops a fan base.

“For me, beer and music are identical,” Hodge said. “You are always curious to try out a new band: What do they sound like? Where are they from? Are they independent or a little more mainstream? It’s the same thing with a brewery.”

When it came time for graduation and wrapping up her final semester of school in  Spring 2011, she sat down and had a conversation with an undergraduate student she had frequently advised as an undergraduate RA. As it turned out, the student’s mother sat on the board at the Painted Bridge with Flying Fish Brewery.

She met the girl’s mother, and now spends her days traveling throughout Eastern Pennsylvania, visiting bars, restaurants and distributors that either carry the Flying Fish brand or potentially could.

“Building relationships with both accounts and the public are what helps grow the brand,” Hodge said.

In this same past year, she started dating her boyfriend Bob, whom she said she had been pursuing on and off ever since she came to Temple. She said with a smile that she could not be happier.

“We each have our own passions,” she laughs as he drinks his PBR as she sips a craft beer. “He knows the music, I know the beer.”

As the music blares over the juke box at Bob and Barbara’s, Hodge glances happily at the bar around her. Her spirit and work embodies what the beer industry has done for society. More than a simple medium for getting drunk, it is a way to bring people together from all walks of life.

Hodge’s work is about so much more than just selling beer and event planning. It is about offering bits of advice to those that are passionate and eager to open their ears.

She reminds students not to worry too much about where life will take them.

“I respect peoples’ passions a lot more now that I have found my own, and I can say it with conviction: Follow your passion,” Hoge said. “You never know where you’ll end up. Stuff comes full circle. This is not where I planned to be, but I’m sure happy I ended up here.”

Matthew Flocco can be reached at matt.flocco@temple.edu.

In case you missed some of TTN’s favorite bar picks in the Bar Guide, check out this list of some of the city’s bars in terms of the draft beer options. Philadelphians love beer –

As the weather warms, seek out the best mixes of triple sec, limes and tequila that the city has to offer. The impending warmer weather signals a change around Philadelphia, as people on Main Campus

The Owls’ seniors didn’t show up for their final game. NASHVILLE, Tenn. – As the horn sounded on South Florida’s 58-44 win against the men’s basketball team in the second round of the NCAA tournament