Guard/forward Lindsay Kimmel transferred from Temple to Villanova after her sophomore season last year. Kimmel, who averaged 5.3 points, will sit out this season due to NCAA rules but will bring her 3-point shooting to the Main Line in the fall.

But then she would call her parents, her siblings, her boyfriend – and they would tell her otherwise.
“I talked back-and-forth with my mom and dad and my sister and brother, Jared, [who plays football at Syracuse,] and they would tell me that these are the major years of my life, my college years, and that I should do something for myself,” Kimmel said. 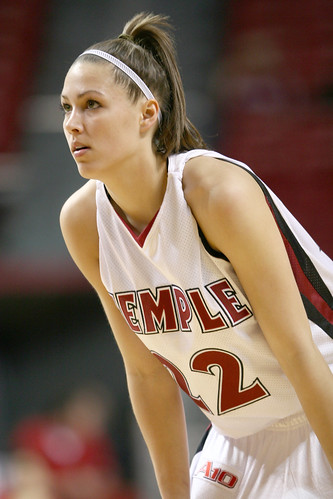 “Ryan [Brooks, her boyfriend of three years and a senior guard on the men’s basketball team] noticed a difference in me, too,” Kimmel said. “He told me, ‘That’s not you. You’re not the same person you were as a freshman. You can’t stay here.’”

So, after two years at Temple on the women’s basketball team, Kimmel asked to transfer.
She wanted to go to a school and a program where she would be happy, where there were no worries, no regrets, she said – she wanted a sigh of relief.

“I know I’m where I’m supposed to be at Villanova,” Kimmel said. “I’m in the right spot. Temple just wasn’t the right fit. Part of me was staying because I never want to be defeated.”

Kimmel said she started thinking about transferring about halfway through last season. Then, toward the end of the Spring 2009 semester, she said her coaches more or less knew she would be leaving.

“They could sense it, I think,” Kimmel said. “It wasn’t a lack of playing hard or anything but how I was carrying myself. I wasn’t talking. I was sitting by myself. My parents told me they could see it in me.”

Entering the season, Kimmel said she was looking forward to playing and watching everything unfold with new coach Tonya Cardoza. It was former Temple coach [and current South Carolina coach] Dawn Staley who recruited her out of Harpursville High School in Binghamton, N.Y., where she led her league in scoring with 30.5 points per game. Kimmel became the first player, male or female, in Broome County, N.Y., to score more than 2,000 career points while leading Harpursville to a Section 4, Class C semifinal appearance her senior year. For her efforts, she was named the 2007 Press and Sun Bulletin Player of the Year.

“I went into the coaching change optimistic,” Kimmel said. “But I was recruited by coach Staley, and it was a complete 360. Nothing was in my control. To be honest, if I was being recruited by Temple all over again now, I probably would not come here. It’s just not the system of basketball I came here for originally. That’s nobody’s fault.”

“I think splitting playing time with Kristen [McCarthy] and Qwedia [Wallace] was hard for her,” Temple coach Tonya Cardoza said. “When she came to me at the end of the season and said she wanted to transfer, I wasn’t shocked. I knew it was coming.

“I told all the players at the end of the year that anybody could leave and go somewhere else if they weren’t happy,” Cardoza added. “I understood they came in with the understanding that Dawn Staley would be their coach.”

Kimmel averaged 5.1 points and 1.2 rebounds in 34 games her freshman season. Last year, she contributed 5.3 points and 1.9 rebounds per game in 31 games, 17 of them starts. She scored a career-high 22 points in a 95-48 win against Rhode Island last January and led the Owls in scoring with 10 points in their Atlantic Ten Tournament loss to Charlotte. But perhaps her biggest game in Cherry and White came in Temple’s win against No. 13 Xavier last season. In that game, Kimmel shot three-for-three from the 3-point line.

“That’s something I hope to bring to Villanova,” Kimmel said. “I hope to bring my shooting, especially from the 3-point line. I’m going to be as aggressive as I can be on the offensive and defensive side of the ball. That’s something I learned from coach Staley. Of course, Villanova is already a great shooting team. It’s not like there’s just one girl who can put it up.”

Kimmel picked the Wildcats over universities like Syracuse and Hartford that were closer to her hometown because coach Harry Perretta recruited her out of high school. Perretta said he recruited Kimmel not only for her obvious 3-point shooting skills but also for her determination, tenacity and the love she has for basketball.

“As hard as I thought it was going to be, especially learning my third system in three years, I’ve picked it up pretty quickly,” Kimmel said. “It suits how I play and my style. It was important to me to stay in a good conference, and I already knew a few of the girls here. So, it was second nature coming here. I didn’t have to go to a team with a coach and players who I would have to research more extensively.”

With her mind made up, Kimmel talked to Sherryta Freeman in the Department of Athletics. Freeman, the associate athletic director of compliance and student services, drew up a permission to contact letter for Kimmel and then a transfer release form for Villanova once Kimmel narrowed down her choices. The transfer release form provides the new institution with information such as the student-athlete’s academic standing and years of eligibility remaining. Kimmel, who has two years of eligibility left, had to have taken two consecutive semesters at Temple and had to have a cumulative grade point average of 3.00 for acceptance at the College of Liberal Arts and Sciences at Villanova. The university also reviewed her high school and college transcripts, standardized test scores, extracurricular activities and an essay for admittance. Gordon Finch, Villanova’s associate athletic director for compliance, said there are no athletic requirements other than what a coach wants or needs in a player.

“It’s a very simple process as far as the [athletic] paperwork, but it can be a very agonizing life decision for the student-athlete,” Freeman said. “The paperwork can go through as fast as one week once the decision is made, assuming there are no hiccups and the coach does not decide not to release the student.”

Before Perretta could sign off on the transfer, he said he sat down to have a long talk with Kimmel to make sure Villanova was where she really wanted to be.

If Cardoza had a problem with the transfer, then Kimmel would have had to sit out for a year regardless. Generally speaking, Freeman said, revenue sports like football, basketball, hockey and baseball require the individual to sit out a year when transferring, no matter what. But there are exceptions. For example, if a student-athlete transfers from a Football Bowl Subdivision school to a Football Championship Subdivision university, he or she can play immediately. Student-athletes who transfer and play a non-revenue sport can apply for a one-time transfer exception that allows them to compete right away in most instances.

As a transfer within a Division I revenue sport, Kimmel will sit out this season. She can practice with the Wildcats but is not allowed to travel with them unless she pays for transportation herself. When the team goes away for lengthy road trips, Kimmel stays behind and gets in extra workouts that she described as “harder than practice” with the trainer.

One game she did attend, though, was the Dec. 20 one against her old team, the Temple Owls, at the Liacouras Center. The Wildcats handed the Owls their second loss of the season with a 44-32 win.

“If I had transferred after my freshman year, I think I would have been a little more sentimental about it,” Kimmel said. “Don’t get me wrong, I still have a lot of really good friends at Temple like [sophomore forward] Kristen McCarthy and [junior guard] Reese Fields, and I Skype with Lady Comfort [who graduated after the 2007-2008 season]. I visit the campus once or twice a week, so I still see them. There’s no bad blood or anything.

“In fact, every time we used to play Villanova before, they always used to joke with me that I was on the wrong team,” Kimmel added.

Now down on the Main Line, Kimmel said she is “thoroughly enjoying herself” at Villanova.

“It’s more spread out here,” she said. “It feels like it’s constantly summer session here because there are only about 5,000 students. The class size is smaller. Before, I had classes where there were 500-plus students. Now, I have classes with 30 other students. It’s very calm here, and there’s not a lot going on, which is good from a studying standpoint.”

Kimmel is still a biology major like she was at Temple but said she might be leaning toward entering the nursing program at Villanova. In addition to focusing on her studies this year, Kimmel has also spent her time getting to know her new conference – the Big East Conference.

“The first thing I noticed watching the conference games was the speed of the game,” Kimmel said. “In the Atlantic Ten, we were the fastest, most athletic team, but the Big East just looks so strong, especially Connecticut. I played with Caroline Doty on an AAU team, and all you can do is take your hat off to them. They deserve everything. They kill everyone by 30 points. We’ll have our work cut out for us.”

Temple finished 42-23 in Kimmel’s two years on North Broad Street and made the NCAA Tournament both times. The Wildcats ended last season 19-14. They also made the Tournament.

“It was a personal decision [to transfer],” Kimmel said. “It had to do with my own happiness. The people here have been so welcoming, and the staff has done so much for me. They opened their arms to me.”

Erica Covile has emerged as a force on the offensive end.

Next step: NCAAs in Norfolk

Temple earned a No. 8 seed in the NCAA Tournament and will play No. 9 seed James Madison in Norfolk, Va., Sunday.