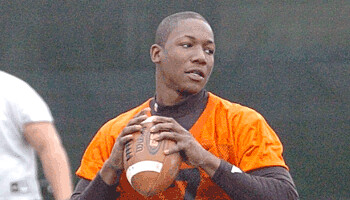 When red-shirt junior quarterback Adam DiMichele fell to the turf with a broken leg last October, many Temple football fans thought the season was lost.

The rising junior from Landenberg, Pa. surprised fans and opposing coaches when he managed to complete 57 percent of his passes en route to the Owls’ 4-8 overall finish and 4-4 mark in the Mid-American Conference.

“It wasn’t too hard,” said Charlton, who stepped in for DiMichele during the Owls’ win over Miami (Ohio) on Oct. 20. “I didn’t really have time to react to it. I kind of just got out and did my thing.”

Charlton will have at least one more chance to lead the offense this Saturday in the team’s annual Cherry and White intrasquad game at the Ambler Sports Complex. His Cherry team will face off against red-shirt freshman quarterback Chester Stewart and the White squad. DiMichele is not expected to play.

“It’s real nice because it’s not the pressure of the season, so you can concentrate on little aspects of being a quarterback,” Charlton said.

Offensive coordinator Matt Rhule has repeatedly stated his desire to have “two starting quarterbacks,” not a starter and a backup. Rhule, who was promoted from quarterbacks’ coach after George DeLeone left for a position with the NFL’s Miami Dolphins, said leadership is the most important quality he looks at in a starter.

“The great quarterbacks run the show,” Rhule said. “You can tell that they’re the quarterback from the moment they walk in the building. And that’s what our quarterback is going to do.”

DiMichele certainly did that last year, becoming the face of the football team’s resurgence — completing 62 percent of his passes for 1,595 yards and 12 touchdowns in the Owls’ first eight games.

After his injury, DiMichele became the eyes and ears for the Owls’ quarterbacks. While Stewart waited in the No. 2 spot, DiMichele acted as a de facto assistant coach for Charlton.

“He worked the sidelines with me and told me what I was doing wrong – told me what the defense was doing,” Charlton said. “It’s definitely back and forth [how] we help each other. Whoever’s in the game, the other quarterbacks help him out just as if they were in the game.”

VAUGHN CHARLTON
Going into last season, the starting job was a toss-up between DiMichele and Charlton. In the fall, Charlton, a 6-foot-4, 220-pound sophomore, openly accepted his role as backup.

For Charlton, sitting on the sidelines was a lesson in how to be a Division I quarterback.

“Because he was on the headsets with us during the game, he could see things happening that when you’re playing you can’t really see,” Rhule said.

Naming a clear No. 1 took a lot of stress off of both quarterbacks. For Charlton, it meant he could use every practice to work on his game, not to compete for a position.

“When you’re in the moment, when you’re fighting for the job, you’re so focused on the next rep, the next play or how you perform,” Rhule said.

While Charlton lacks the athleticism of DiMichele or Stewart, he makes up for it with his ability to make big-time throws. A pro-style passer, Charlton threw just one interception after he inherited the offense last season.

CHESTER STEWART
Stewart was an unheralded backup at DeMatha High School in Maryland when he came to coach Al Golden’s summer camp in 2006, just before his senior year. After a few passing drills, he was the Owls’ quarterback of the future.

“I think he threw the ball and they heard it,” Rhule said. “He’s got a really good arm.”

Stewart went on to have a stellar senior season at DeMatha. He red-shirted and led the scout team last fall.

Much like Charlton, time on the bench has allowed the 6-foot-3, 195-pound Stewart to learn what it takes to be a Division I quarterback.

“I was able to practice and see how college football [worked],” Stewart said. “[I saw] what the pace was like, how the tempo was without getting on the field.”

Quarterbacking the scout team, Stewart had to face the top defense in the MAC and the best red zone defense in the nation on a daily basis. Rhule said he was up to the challenge.

“Working with the scout team is just like seeing what it’s like to play against a good defense,” Stewart said. “A lot of people working to get better.”

With DiMichele still rehabbing his injury, Saturday’s game will show the coaching staff how far the two backups have come. It will also provide a glimpse of the two quarterbacks expected to lead the program over the next couple of years.

“We need a guy who can run the offense, and who can throw the football,” Rhule said.

“I want a guy who can make plays by any means that he has to.”

Chris Reber can be reached at chris.reber@temple.edu.

Adam DiMichele and a dominating defense led the Owls to a 27-6 victory over Akron, as coach Al Golden’s first true senior class went out as winners.