A young man in his early twenties enters the store looking for a used guitar, but instead finds a perfectly good lamp that reminds him of his childhood. When the asking cost is a little steeper than expected, the man at the register lets him walk away with his treasure at half price. That’s just the way it is at Bada Bargains. 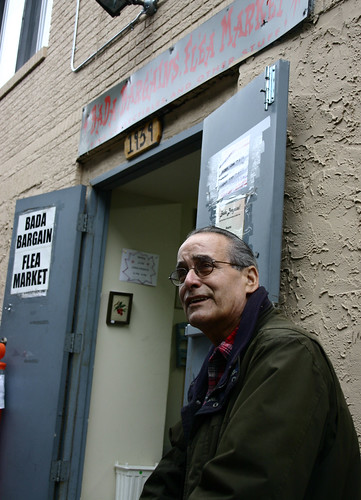 Located just north of the Berks Street entrance to the Market-Frankford Line at 1939 N. Front St., the store sells items ranging from blinking icicle lights to the record Waltz Time to an antique Zenith radio. Between aisles of purses and jackets, customers can find towers of board games and old books.

Although the family has been selling antiques and collectibles for years, the Bada Bargains store has only been open for about a year and a half.

Mary Ann said that while the store’s clientele is extremely diverse, it is ideal for college students because of its variety and supply of vintage finds.

The store has shelves full of videotapes that range from John Wayne films to Beaches. If customers pick up the utensils, pots or pans, they should also peruse the shelves of food at the front of the store.

“It’s like a little grocery store,” Paul said of the soup cans and cereal that line the wall.

Knowing that most college students are living off a tight budget, Paul is sometimes willing to negotiate deals on items.

“We get college kids who can’t rub two nickels together,” he joked. “They say 25 cents for [something that’s worth] $5, so just take it!”

The Kellys look for interesting and unique items at auctions and yard sales.

“A lot of times you find things in the trash,” Mary Ann said, pointing to an old radio.

Mary Ann also said that a section of Craigslist now provides “curb alerts” or notifications when a person is planning to throw something away.

“It’s free stuff. College kids would love that,” she said.

Looking for old chairs or a used handbag on the curb is what makes her job enjoyable, Mary Ann said. The family even keeps regular customers in mind when they are searching for their next treasure.

“One man likes statues of ducks, and one guy collects VHS tapes,” Mary Ann said. “He has a couple thousand in his basement.”
The Kellys always attempt to keep their regulars’ favorite items in stock.

“You go out and buy it, and then they buy it from you,” Mary Ann said. “Everyone profits.”

Frances McInerney can be reached at frances.mcinerney@temple.edu.