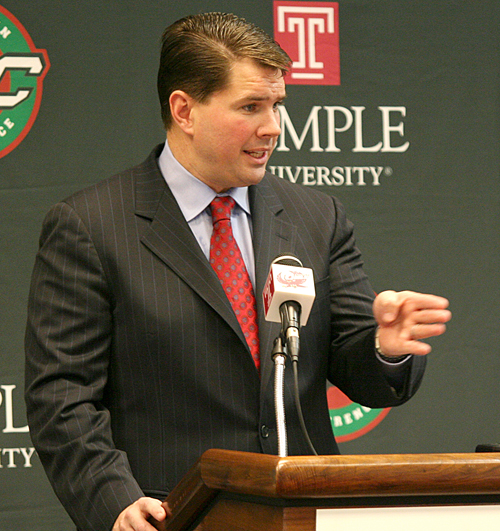 Three Big 33 All-Star Game participants were among the 26 new players who will don a Temple uniform for the football team’s upcoming season.

Including Carraway, the Owls signed players who received offers from powerhouse programs like West Virginia University and the University of Michigan, both teams that played in bowl games last season.

“That’s whom you want to be fighting with,” said coach Al Golden, who is bringing in his third recruiting class. “When we came here, the tendency was to take whatever you could, based on what [had] transpired in the past.”

The Owls did not win all the battles though.

They lost four-star wide receiver Andrew Harris, from Chatham, Va., to the University of Mississippi.

“Losing a kid to Ole Miss is nothing to be ashamed of,” Golden said. “We got in the fight, made the kid go down to the end with us. That part of it was good.”

Despite some of the recruits that Temple lost, the team is still ranked in the upper-tier of both Rivals.com’s and Scout.com’s Mid-American Conference recruiting rankings, mainly because of Carraway. The 6-foot-2, 170-pound wide receiver from Laureldale, Pa, was a team captain at Muhlenberg High School and a participant at the 2007 Al Golden Football Camp in June.

Defensive end Alex Jackson from Dunnellon, Fla., and athlete Anthony Rapley from Atlanta weren’t as heralded as Carraway, but they really impressed Golden and his staff.

“We don’t shop from a catalog,” Golden said. “We trust what we want, and identify it. If we can see it and move on it, we don’t need anyone’s verification.”

Golden and his staff signed players from nine states and Washington D.C. In addition, 12 prospects are from Pennsylvania, while five are from Philadelphia.

Golden mentioned that some of these recruits would play right away. Others will redshirt, which is a luxury he really hasn’t had until now. At the least, these additions will give the Owls depth, which is another convenience Golden hasn’t really had until now.

The Owls hope to address three areas on the offensive side of the ball, Golden said. He said he wanted “lunch-pail” offensive linemen, sizeable wide receivers and a fortified running back.

However, improving in those three areas is not good enough for Golden, who guided the Owls to a 4-8 record last season, with each win coming in the MAC. He said he wants a trophy and a bowl bid, now.

“We’re getting bigger and stronger,” Golden said. “It’s a great day for us. I think we got what we wanted, in terms of what our needs were. But this is not the final stop.”

That statement could be interpreted as a sign of relief for the current Owls after Golden interviewed two times to fill the previously vacant head-coaching job at UCLA in December. Former Baltimore Ravens assistant coach Rich Neuheisal accepted the position on Dec. 29.

“One of the perennial powers in college football wanted to talk to Temple’s head coach,” Golden said. “I think that’s great. That’s just part of the deal. But my heart’s here. I voted with my feet.”

Golden concluded by saying that now is the time do something.

A fitting way to end a day in which the message was ‘Once you sign on, we are all in this together.’

Sophomore Daryl Robinson, a top recruit in the 2007 class who played running back last season, has moved to cornerback where he is certain to be more of a difference maker, Golden said. The Philadelphia Inquirer ranked Robinson as the best cornerback in the state when he was Northeast Catholic High School. During his press conference, Golden mentioned that there were more than 70 players on the field and in the weight room on the players’ day off Wednesday.

Todd Miller can be reached at todd.miller@temple.edu