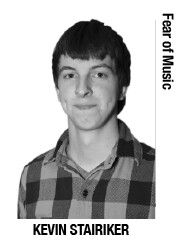 I like to think that more often than not, I generally know what the popular hits of the day are. At least if I didn’t listen to a song, I know what the title of it is and so on. However, when it comes to the song “Pumped Up Kicks,” I’m sort of at a loss.

I didn’t know the song existed until about two weeks ago when a visibly excited friend of mine played it for another friend. I found out the inoffensive tune was by a band called Foster The People, which I’m sure all of you knew already. I assumed that because the band’s name wasn’t Lady Gaga or Katy Perry, the song was/is something of a mid-level hit, maybe something to be played by Radio 104.5 after a Paramore song and then before another Paramore song. And then I researched it a bit more.

As of this writing, the official video for “Pumped Up Kicks” has more than 30 million views. People, that’s almost at videos-about-cats level. It even reached the third spot on the Billboard charts. Where was I?

And more importantly, was I missing anything? The most glaringly interesting thing about the song is that even though it has relatively relaxed instrumentation, the song is pretty clearly about a kid finding a gun in his dad’s closet and going on a killing spree. The subject matter alone makes the song an anomaly, but what’s even weirder is that a band–playing instruments no less–could get such a seemingly miraculous hit single. Let’s break this down scientifically.

After years of toiling in obscurity, the band was picked up by Columbia Records and released the fabled “Pumped Up Kicks” in late 2010. The song premiered at No. 96 and then, through word of mouth and steady radio airplay, eventually made it all the way up to No. 3 after appearing on their debut album.

Considering the way the music industry works these days–or any day, really–this is a pretty remarkable thing. Due to this song alone, a door was kicked wide open for Foster the People.

As good as all of that is, there are also negatives. Foster the People appears to be a band that is genuinely attempting to make a career for themselves, but with their initial single being this big, how can they? And this definitely isn’t the first time a band couldn’t live up to their first big hit.

Last year when Passion Pit came to the Liacouras Center, I made it my business to go. I had listened to their debut album “Manners” inside and out and was pretty excited to see them. Apparently everyone else had different plans. The large majority of the crowd had come to hear the perennial favorite “Sleepyhead.” At this point, it had been used in a commercial for something, which was assuredly the reason for this newfound fandom.

The band played their entire set without cranking out “Sleepyhead” and left the stage. At this point, the audience starting shouting. Did they shout “encore!” or “Passion Pit!” or “Woo!” No. They immediately began to chant “Sleepyhead,” as if the band wasn’t about to come back out and play the song for the hungering masses.

That’s where a band like Foster the People runs into a problem. They dig themselves the classic hole of immediate success that dictates that their next songs literally have to be on par or better than “Pumped Up Kicks” or they’re considered a failure because that’s the musical climate we live in today.

But it sure is a catchy tune, isn’t it? The song follows the 2011 hit blueprint pretty accurately: Throw together a somewhat forgettable verse structure and a humongously infective chorus and you can strike gold in them pop music hills.

It’s a song that could’ve easily been a Vampire Weekend b-side, but you can’t blame Foster the People. If a band wants to break through the rising seas of mediocrity in the ocean of music, there’s a certain need to feed the beast of popular soundscapes, and “Pumped Up Kicks” delivers in spades. Cracked vocals and whistling plus quasi-psychedelic keyboard hits and that golden chorus hook all equal exactly what the mainstream audience needed at exactly the time it needed it.

In short, it’s the kind of song that reminds people that, yes Virginia, there still is somewhat of a place for bands to write their own songs that people might actually enjoy regardless of hipster cred or not.

As I mentioned near the beginning of this column, this is an inoffensive tune. To me, it’s the audio equivalent of a peanut butter and fluff sandwich: It’s a great thing to eat once in a while, but if you eat them all the time, you might get sick.

“That’s When I Reach For My Revolver”-

“The Guns Of Brixton”-The Clash