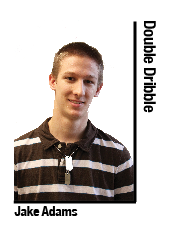 Women’s basketball has a trio of freshmen guards ready to start.

The women’s basketball team’s defeat of Big-5 rival Penn saw a mix of the old and the new.

“It was good to have all three of them out there, and playing together, and trying to figure things out on their own and not being able to look over to [BJ Williams and Peddy] for the answers,” coach Tonya Cardoza said.

It’s a critical time for the fledgling Owls, who have to learn quickly. Peddy, McCarthy and BJ Williams are the only guards on the roster with starting experience and all three will play their last games in March.

“They know that we’re counting on them and that they’re not freshmen, they’re not regular freshmen,” Cardoza said. “We need them to play for us.”

“I think from the beginning to now they definitely have matured,” Peddy added. “I think they feel the pressure. They can no longer see themselves as just being freshmen because they have to step up. We need them down the stretch.”

The pressure they feel is the pressure of replacing two of the best guards to walk into Temple in McCarthy (1,433 career points) and Peddy (1,605 career points at Wright State and Temple).

“[Tyonna Williams] tries to be the leader out there, which is good because that’s her personality,” Cardoza said. “Obviously I want [Merritt] to be that leader because she’s the [one] with the ball in her hands. But I thought they did a really good job, especially down the stretch being able to still defend them and not turning the ball over, making good decisions on offense.”

“Whoever’s out on the floor they’re playing with confidence and that’s half the battle right there,” Cardoza added.

Tyonna Williams has seen the most action this season, playing in 17 games and starting two. The Maryland native has averaged 3.5 points in 15.7 minutes per game, including a career-high 11 points in a loss to Rutgers in November.

Merritt hasn’t been as flashy, but has shown a better ability to run the offense with each game. The lone Philadelphian on the team, she’s played in 12 games and averaged 1.8 points and 12.1 minutes per game, including a career-high six points in the Owls’ win against Dayton last week.

“[Merritt is] a perfectionist,” BJ Williams said. “Once you get [her] to get out of her head and just play basketball [she’s] excellent and you saw that in the Dayton game.”

Brown has been left behind a bit compared to her classmates. She’s played in 10 games, averaging two points and 6.3 minutes per game. The Owls’ signed a fourth freshman guard, Shaniqua Reese, but she was injured in the preseason and is currently not on the roster.

Life hasn’t been easy for the freshmen trio. Every day in practice is a battle with the upperclassmen, but it’s all meant to prepare them for next year.

“I feel like just how much we pressure them and get on them in practice, next year when the freshmen come in they’re able to take that and apply it to them,” Peddy said. “I feel like next year they’ll be ready and be able to handle that.”

“I think that right now they’ve jumped over the hurdle where they know what’s expected of them,” Cardoza said. “And when they don’t do it I think it bothers them.”

Despite the “lead” that Merritt and Williams have on Brown and Reese, it’s anybody’s ballgame next year to fight for the starting spots.

“I don’t know,” Cardoza said of who she thinks will be starting where next season. “I mean I don’t. They have the opportunity. Obviously they’re going to have the experience over the [ones] that come in as freshmen and hopefully they take advantage of that.”

For the third time this season, redshirt-senior guard Josh Brown hit a go-ahead shot to help the Owls beat Penn 60-51 on Saturday at The Palestra.

The Owls won their season opener in overtime. Senior guard Juan Fernandez drained a three with 17 seconds remaining in overtime to secure a five-point lead for the Owls, as they went on to win

PDX Fencing sabre club in Oregon is pipeline to Temple

Temple has had four fencers from PDX Fencing since 2012.