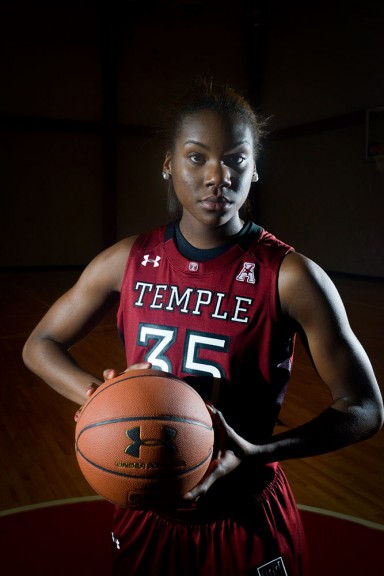 In the 2012-13 season, the Owls’ leading point scorer, shot blocker and rebounder was senior center Victoria Macaulay. Now, Macaulay is playing basketball in Italy and two freshmen will step into some big shoes.

“The two post players in that freshman class have to get better everyday in practice,” coach Tonya Cardoza said. “They have to contribute.”

With the departure of Macaulay to graduation, Temple has managed to bring in two freshmen centers, Safiya Martin and Taylor Robinson, to play significant minutes for the Owls this year.

“I wouldn’t say its pressure,” Martin said. “It’s more so a challenge to not just step up to the plate but see what I can do to not necessarily be in her shadow but make my own footmark in Temple women’s basketball. I see it more as a challenge to show people what I can do and what I am capable of doing.”

Last season, Macaulay was the focal point of the Owls’ offense, recording a team-highs in points, scoring 14.1 per game, and rebounds, pulling down 9.4 per game. The Atlantic 10 Conference All Defensive Team member also registered 91 blocks last season, ranking fourth in program history for a single season.

When Macaulay graduated, Temple’s biggest offseason roster need became filling the void that the former Owls center left behind. The void was filled when Temple managed to sign the 6-foot-4-inch duo of Martin and Robinson.

“It’s huge for us, but they are freshmen,” Cardoza said. “You’re talking about losing a senior center who had been here for four years. It’s going to be hard for them to replace all that she gave us her senior year.”

Martin is a Sandy Creek High School product who earned several accolades during her time playing in Georgia. During her senior year of high school, Martin was honored as a Class AAAA Honorable Mention All-State by the Georgia Sportswriters Association.

“I’m excited for the season,” Martin said. “Just ready to see whatever comes. [I came to Temple for] the academics for sure, the coaching staff, the team made it seem like a family setting. I love Philadelphia. It’s just something new.”

Robinson hails from St. Louis, where she played for Ladue Horton Watkins High School. Robinson was named  the Suburban East Player of the Year in her junior year and was also nominated to play in the 2013 McDonald’s All-America game.

Even though the freshmen mirror Macaulay in height, Martin and Robinson differentiate themselves in their offensive style. Both freshmen centers lean on being a presence in paint, favoring traditional post play.

“The biggest difference between them is they’re back to the basketball players, where Vic was more of a face up, put the ball on the floor, which made it difficult to guard Vic,” Cardoza said. “These guys are bigger, stronger, but they both still need a lot of work.”

As the season goes along, Martin and Robinson will have to make the most of their playing time and make strong individual impressions for an increased role on the team.

“I know [Cardoza] expects a lot out of especially Taylor and I because we’re the only centers as of now,” Martin said. “We’re creating our own role. She just wants us to work hard, come in everyday, basically get the job done, don’t ever quit and just give it your all.”

With no full-time starter in place, Cardoza said Martin and Robinson’s opportunities will hinge on opponents the Owls face this season. Depending on opposing lineups, Temple may not always have centers on the floor, limiting game time opportunities.

“Right now, it’s more so depending on who we play against if we go big or we go small,” Cardoza said. “I don’t see them playing a lot together early on because they’re both still really young and not really understanding or grasping everything that’s being thrown at them.”

“They’ll both get to play, but how much, I’m not sure yet,” Cardoza added. “It all depends on who our opponent is and how they’re handling the situation in that particular game.”

Though she is reluctant to name a front-runner out of the two players, Cardoza said Martin’s work ethic has shown in practice and she is worthy of individual praise.

“[Martin is] someone who hasn’t played basketball very long but she’s picking things up and she works really hard,” Cardoza said. “She’s probably going to see some time really early, just because of her work ethic.”

The expectations are tempered as the beginning of the season draws near, but as the weeks progress, time will tell how vital Temple’s loss of its veteran big will be and if its young acquisitions can produce in her place.

Brien Edwards can be reached at brien.erick.edwards@temple.edu or on Twitter @BErick1123.

Will the small roster hurt the Owls? Can Temple upset one of the conference leaders? How will the team adjust to the loss of five key players? Is the tournament streak in jeopardy? Which of the underclassmen will have a breakout season?