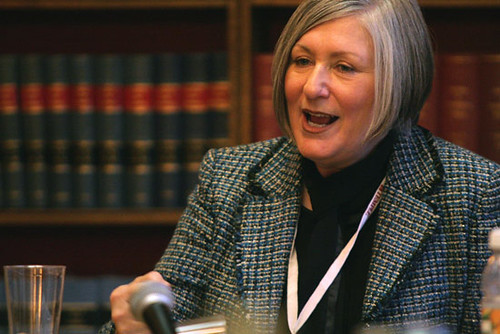 The Temple News: A great amount of Temple’s endowment was raised just in your first year of tenure, more than had been raised in any year of the capital drive, before it went public. What exactly do you think did it?

Ann Weaver Hart: First of all, there was a real groundwork of planning laid before I got here. It’s important to know that … We already had a travel schedule before I got here because the great team in University Advancement had already decided to colonize parts of my calendar and commit me to travel around the country to raise money. We had been in the silent phase, so there was a lot of really good planning that had taken place, and I believe that part of my success was that I was able to embrace that planning [and] push hard on concluding what our publicity campaign was going to look like … I was able to build on that foundation and push hard on it very quickly and I was encouraged and inspired to do that because of the intellectual and sort of buzz excitement on campus.

TTN: What happened to make the university’s contact with alumni more frequent?

AWH: I just gave everybody permission to schedule me. And we worked very hard internally with the Office of the President’s staff to try to make my schedule as tight as we could, to put me in touch with as many important plans and supporters of Temple as we could during my first year … A lot of people worked hard to help my schedule fit into that kind of intensity.

TTN: There’s been a lot of high-profile turnover at Temple. Do you see turnover as another way of increasing fundraising in another way?

AWH: I don’t think any individual leadership change is stimulated by . . . what is the same everywhere. Part of it is when people really are in a stage in their careers where they are preparing for and want to do something different … Whether it has a positive or negative impact on fundraising is largely dependent on everyone – both the successor and the predecessor works to do the handoff, to tell the Temple story with passion and support so that the friends of Temple who are getting to know us better are confident about the future.

TTN: Many students said they would’ve liked to hear from you after the assault at Anderson Hall. Did you have any experiences that prepared you for this?

AWH: I was on the fastest train in Taiwan traveling from Thai Pei to Thai Non when I got the announcement myself, so that’s why you didn’t hear directly from me. I was unavailable with a 12-hour time difference. I think that’s a fair question. The other thing that we’re learning is what are the best ways to communicate … The question is, when we use an emergency alert [system], do we want to send everything that way or only when there is an immediate action required, and I believe that we need multiple ways to communicate.

TTN: Has there ever been any interest or even reason to include surrounding communities in that kind of alert system if there was a large scale threat?

AWH: We actually do have a plan and work very directly with the Philadelphia Police Department. Our police forces work absolutely together, so those things don’t happen independently, and the police in the neighborhood actually go around – we have the kiosks. We have community groups. We have a whole network.

TTN: A collection of student organizations recently held a “Disorientation,” where one of the requests they made was to allow free access to the TECH Center and the Paley Library to community members. Do you see this as a potential safety hazard for the students?

AWH: I think it is a safety hazard when you don’t know who the people are using your core facilities, and with the TECH Center as the question – it’s jammed with students. There just isn’t space. I’ve heard from students that we already need a new TECH Center, because while it’s great to be able to work until two o’clock in the morning, it might be great not to have to work until two o’clock in the morning. That kind of access to facilities that costs a lot of money to build and preserve as well as safety questions is important, but we already have a program for the library and other resources for community members to be able to come in and sign up, so we know who they are and they’re a part of the community. I would encourage – we have a Web site, we have other information with the library – that people in our immediate neighborhood should take advantage of the many programs we do have.

TTN: There’s been an increase in student activism on campus. How does that compare to what you might have experienced at the University of New Hampshire?

TTN: Why do you think that is?

AWH: You know, I hate to speculate, because I also was in Southern California, and student activism was greater there … In New Hampshire, you’ve got every candidate on the face of the earth coming by, so you will meet every presidential candidate from every party in the student union. It’s a different atmosphere politically, so that might be part of it. I think that our students have held very serious, very important conversations about major issues related to their studies and their nation and state, and that those are important parts of higher education … Those dialogues are a critical part of university life, and we should respect and encourage them whenever possible.

TTN: What kind of struggles did you face as a woman progressing through your career?

AWH: The biggest challenge was that I started my life with a very traditional sort of expectations for myself. … So planning and thinking systematically about what I needed to do and should do – along with the family that is so important to me, that has been such an important part of my life – was a challenge because I didn’t have any role models … My biggest barrier was my own lack of aspiration. It awakened in me gradually starting with the first graduate course in history that I took in the winter of 1980 because I was just a little bored, so I got a babysitter and went and took a night course at the university and I just have never looked back.

TTN: The campus is going to get a little larger with students from the Tyler School of Art coming to Main Campus in 2009. Where are all these students going to go?

AWH: We have a plan for the transition years for housing, both on and off campus, to help people with finding a place to live but living on campus. There is a whole chain from residential life and from housing, from [Provost] Lisa Staiano-Coico’s office and the associate dean of the Tyler school. So, there is a lot of planning going on for both the transition year and to increase opportunities for housing beyond that. As apart of the academic strategic planning process, we have a whole work group that’s focusing on our physical facilities. Student housing in the future is a part of that planning and discussion so that we can address both the desire to have more residence hall-style but also more off-campus accessible without conflict with the neighborhood … I am just extremely excited about having the presence of art production – glass and ceramics and painting and watercolor – and all of the very exciting creative things that go on in the student arts program right in the middle of campus where all of us who are not production artists can experience that, can go to installations, can go to student art exhibits, can feel the very different and creative atmosphere that an actively producing creative artist creates. And right next to the Boyer College of Music and Dance, right next to the School of Communications and Theater, it brings the arts right to the heart of campus in a way that I think is very exciting.

TTN: When we spoke to you last year, you were getting to know people here at the university. What lessons have you learned from the people that you’ve met, specifically your predecessors who are still active here on campus?

AWH: Both President [David] Adamany and President [Peter J.] Liacouras have been extremely gracious and welcoming to me and I’m very grateful for that. When you add President [Marvin] Wachman, who is also a former president who is on campus, there are not many people who have the advantage of that many years of leadership and commitment.

President Liacouras has a lifetime of professional contacts in our city and state. [He] graciously introduces me to people he knows, calls me when he hears something on the street that is important to know.

President Adamany is actively engaged in teaching [and] is interested in leadership in the law and in politics and really began a dialogue about how we can continue to focus on being the best that we can be.

President Wachman is such a gracious and generous person. President and Mrs. Wachman have given us their Florida home to sell for a huge gift for Temple University and have donated significantly, not just in his time and memoirs, but also in their financial resources to Temple, and both President Adamany and President Liacouras have done so as well … You always say you stand on the shoulders of giants and we mean that, all of us do, every student who follows students who laid the groundwork benefits from what came before and every president gets the same benefit.

TTN: Have you ever thought of Temple as a ‘safety school,’ and with the standards increasing this year, is that a trend we’ll see in the future?

AWH: I’ve never really thought of Temple as a safety school – and we’re not a safety school … The notion of a safety school is an interesting one for me because it implies that, ‘I’ll be happy there, but I’m only applying there because I might not get in some place else,’ and that’s an interesting concept to me … We have cranked up our multiple points of access to Temple with recruiting transfer students, with working on dual admission programs so that students who aren’t quite ready to be successful in a more rigorous program [can], with a few years of maturity and study under their belts, will be successful … First-time, first-year students – it is harder to get in, and a number of trustees have told me that over the past few years, and more recently in just the last few years, people are calling them, asking them to get them into Temple or to get their grandniece into Temple or to get their son into Temple, when they weren’t getting those kind of calls in the past.

The Temple News staff can be reached at
TempleNews@GMail.com.