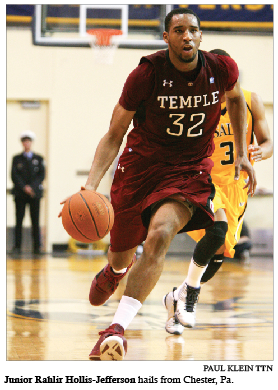 The Owls will rely on the junior forward to pick up the offense.

In the city of Chester, Pa., basketball is a way of life.

From the early development on the playgrounds and in the Biddy League on the hardwood, the game becomes ingrained into a player and stays forever.

“You start at a very young age at basketball in Chester … 5, 6, 7 [years old],” Hollis-Jefferson said. “We have the Biddy League, and that’s where your parents just want you to go out and do something positive, and basketball is the main thing people stick with in our city. That’s what we do.”

Between his junior and senior years at Chester, Hollis-Jefferson went from a role player to the leader of a program that is woven into the Pennsylvania history books.

“In high school, we had a senior-driven team where we had at least three or four other scorers and all I had to do was play defense and score sometimes, whereas once I became a senior, I had the ball more and I had to make more decisions,” Hollis-Jefferson said.

“Now, it’s kind of the same, but we still have scorers here and I’m going to have to score more – I don’t know if I’m gonna have to score as much as high school. But, it’s not that different.”

With three of the starting five set to graduate from a Temple squad that was nationally ranked in the regular season, Hollis-Jefferson will be called on to do exactly that: become one of the leaders for the Owls next year.

Along with teammates Khalif Wyatt, Scootie Randall and T.J. DiLeo all returning for their senior seasons as well, Hollis-Jefferson said the Owls will still have enough scoring power.

“I think I can step into that role and everyone can follow by example,” Hollis-Jefferson said. “[My teammates and I] are all good friends, we’re pretty close like brothers. They know that I’m not that vocal, but I’ve worked hard so if I can go out there and show how hard I’ve worked then maybe they’ll follow.”

Last season Hollis-Jefferson averaged 9.3 points and 6.6 rebounds per game as a regular in the starting lineup and contributed as a facilitator for guards Ramone Moore and Juan Fernandez.

“He’s a fabulous individual,” coach Fran Dunphy said. “He’s as good a human being as I’ve had a chance to coach. His first thought is always about his teammates, so he’s probably known more for his defensive capabilities than his offense.”

Dunphy said he hopes to see a transformation in the 6-foot 6-inch junior during the offseason.

“We’re going to need him to be more of a scorer [next] year for obvious reasons because we’re losing some very good scoring from our team,” Dunphy said. “But, he also has to maintain that high level of defensive reliability that he has. We’re going to ask him to make plays more than he’s ever made in the past.”

In the Atlantic Ten Conference tournament, the Owls were bounced in the first round by Massachusetts, then also suffered the same fate in the big dance when South Florida used a stifling defense to send Temple back home after a stellar regular season.

With that in the rear view mirror, Hollis-Jefferson said he feels he needs to work on some things in the gym during the offseason to kick his game into another gear.

“I don’t think he ever shies away from the game,” Dunphy said. “He loves the game, I think he loves his teammates, he loves competition. My sense is he will shoot hundreds and hundreds of jump shots every day.”

Hollis-Jefferson’s brother, Rondae Jefferson, is a junior who is coming off leading the Chester Clippers to an undefeated season and the PIAA state championship.

“I’m very proud of him,” Hollis-Jefferson said of his younger brother. “He told me he was going to win more championships than me in high school.”

“Right now, he’s got it,” Hollis-Jefferson, who won one state title in high school, added. “I can’t tell him anything.”

Hollis-Jefferson’s brother is already generating interest from many Division I schools, including Temple.

The brothers are about the same size, but Hollis-Jefferson acknowledges there may be more differences than similarities.

“I like to watch him play, but I don’t think I do the same things he does,” Hollis-Jefferson said. “He’s like the big guard – flashy, Magic Johnson-type passes and stuff. … He gets more vocal but, also, he tries to lead by example as well.”

Hollis-Jefferson and company hope to lead the Owls to its fifth-consecutive NCAA tournament berth in the final season as a member of the A-10.

Dunphy said Hollis-Jefferson has the experience and leadership to guide the rest of the squad and make the decisions in critical moments of a game.

“We need him to be on the court, especially at crunch time because you can rely on him defensively,” Dunphy said. “You can rely on him to be in the right position. Now, what we have to rely on is great decision-making and improving ball-handling for [Hollis-Jefferson] because our team is going to need that.”

While Hollis-Jefferson may not be the most talkative player and steers away from the spotlight as much as he can, he lets his play on the court speak for itself.

“I’m not very vocal,” Hollis-Jefferson said. “I can be sometimes with my teammates, just telling them to keep their heads up. But, I’m more of a ‘show ‘em’ kind of guy. I just let go out there and lead by example.”

“I hope he improves in every aspect of the game, because we need him,” Dunphy said. “He’s going to be a stalwart for us next year, not that he hasn’t been a stalwart already. He’s been a good player you can really count on.”

Bud Weaver can be reached at bud.weaver@temple.edu.

Lay up or shut up

Owls face toughest tests against Villanova and Duke this week.

Will Khalif Wyatt respond? Can Will Cummings emerge? How will minutes be managed? Will egos alter team chemistry? Will March woes continue?

Career high for Hollis-Jefferson in win