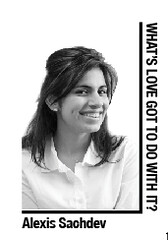 Columnist Alexis Sachdev scopes out unconventional spots to locate your next lover.

Until today, March 20, I had previously not been able to legally go to bars to pick up a strapping young lad. That’s right, folks, I went to bars underage. Ahem, I meant to say that today’s my 21st birthday. But as I write this approaching the big two-one, and after contributing to The Temple News’ Bar Guide, I can’t say I’m necessarily looking forward to the new hunting grounds I’ll gain admittance to.

Something about meeting “Mr. Right” or “Mr. Right Now” in a dimly lit, overcrowded big-kid frat party leaves a sour taste in my mouth. One that can’t, mind you, be washed away with another drink.

The myth of successfully picking up someone at a bar is just that: a myth. The odds of some stranger coming home with you after you’ve been bankrolling their bar tab all night are slim. The bartender will announce last call, and once the bar starts spilling out, you’re more likely than not going home alone. And, should you get lucky, the odds are against you again: Most people report those interactions don’t go further than a one-night stand.

After all, the journalism biz doesn’t supply enough funds to support a lush lifestyle of frequent nights out in Northern Liberties, especially the games at Barcade, or cabs to and from.

Disillusioned with the bar scene and lacking a furry friend to parade around Beury Beach to pick up the Internet’s next Cute Boy with Pets sensation, I’ve been left wondering where to go. If you’re like me, here are some suggestions for some unconventional spots to scope out your next cutie.

Being so close to Lancaster County, Philadelphia boasts a large array of farmers’ markets to choose from throughout the city.

Guys: Shopping for some organic asparagus is a great time to invite her over for a home-cooked meal and some, um, dessert. Whether its good or not, we probably won’t care. We’ll be more impressed by your effort. Unlike going out to a restaurant, cooking at home gives both of you a better opportunity to talk and allows for cute photo-ops after the expected food fight.

If you’re a Mac, head down to the Apple store at 1607 Walnut St. The store – and most locations nearby – are constantly crowded, so the odds are already in your favor. Besides, when your Macbook goes on the fritz, it’s always nice to have a gadget guru nearby to calm your frantic screams.

If you’re waiting for your appointment with the Genius Bar, strike up a conversation with a nearby shopper. Several locations offer workshops on iMovie, Garageband, podcasts or basic introductions to Mac products. Check with your local store to see which workshops are available and sign up. But don’t forget about those sales associates. A little appreciation for the cutie working on your computer can go a long way.

True, the last thing you’re thinking about while squeezed between hundreds of people on the Broad Street Line is macking on one of them. But if you’re a commuter or just frequent rider, chances are you’ve started recognizing some of your fellow riders.

Next time you step on the Broad Street Line, leave your leisure reading in your bag, put away Draw Something and sit near your prey. A simple and coy, “Hey, weren’t you in my Mosaics class?” should do the trick to get the ball rolling. Next thing you know, you’ll be walking arm-in-arm down Broad Street. It’s as easy as riding the bus.

Who knows, if all goes well, you can submit your love story next February. Each year for Valentine’s Day, SEPTA holds the “Moving Love Stories Contest,” where people who found love while commuting can submit their stories and enter for a chance to win.

At the end of the day, there are eligible bachelors and bachelorettes everywhere. What matters more than the location, however, is the courage to strike up that initial conversation and lower your inhibitions. One day about a year ago, walking from class to the newsroom, I was approached on the street by a friendly stranger. After I lowered my guard, I agreed to go on a date with him, and you know what? It was a great afternoon.

Libby Peck’s sex column takes a turn when her love life takes a new turn as well – with newfound monogamy.

Editor suffers ups and downs of life in 1940

Living Editor Alexis Sachdev recounts getting stuck in a 1940 residence hall elevator. Last Thursday, I was saved. One minute, I was lying on my back, accepting my impending fate. The next moment, bright lights

A first love: Watching it grow and fade

A student describes how she first fell in love when she was 18, and how it ended.