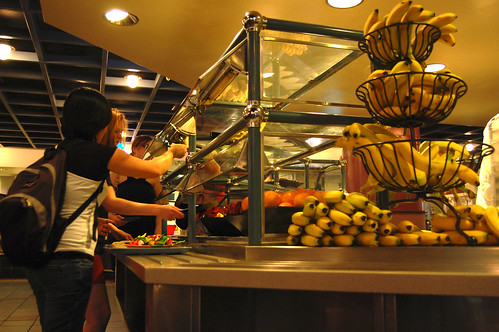 Changes are coming to the Johnson & Hardwick cafeteria this summer, and it’s not in the turkey tetrazzini recipe.

The Louis J. Esposito Dining Court will see a major facelift, literally from the floor to the ceiling.

The dining hall will close at 7 p.m. tomorrow, the time when all students will be moved out of the residence halls.  Lingering students will see the demolition crew arriving at that time as the construction will begin immediately, General Manager David Tolbert said.

The construction, the first structural change the building has seen since 1993, is scheduled to be finished by the fall semester, giving contractors a 19-week window to complete the renovations.

“Just like any other business or home, you definitely want to do a renovation in a timely fashion so that it’s a pleasant area,” Brown said.

The $4.2 million expansion, funded by Sodexo, will create 250 more seats in seven seating areas, bringing its total capacity to 704 people.  The wall facing Annenberg Hall will be removed, and the structure will be expanded to the loading dock, Tolbert said.

The food will mostly remain the same, Tolbert said, but its availability will likely increase.  A vegan bar, breakfast bar and omelet bar will be permanent features.  Both the salad bar and fast food bar – which typically contains hot dogs, hamburgers, grilled cheese and french fries – will have two stations to ease overcrowding, Tolbert said.

“Just from the nature of the setup, it’s going to allow us to be more diverse and to do more things with our menu,” Brown said.
Additionally, a third beverage station will be added to the back of the dining hall.  A display cooking station is planned to be added within the dining hall, which will act as a “teaching kitchen,” Tolbert said.

“We’re in the food business,” Operations Manager Dolores Abbonizio said. “I want food to be seen­—not flowers [or] statues.”
The overall goal of the new floor plan is to decrease congestion, Tolbert said.

The renovations over the summer mean new arrangements for students taking courses during the two summer sessions.  Operations will be moved from J&H to the Student Center’s Valaida S. Walker Food Court.

The Burger King and Einstein Bros. Bagels will be open to use with the meal plan for cash equivalency, just as they are now.  Inside the court itself, a J&H-style buffet will temporarily replace the current operations, Tolbert said.

Otherwise, no major changes will be coming to the Student Center food court.  Signage updates and new food boards are the extent of the renovations, Brown said.
Posters featuring the new layouts adorn the walls as students exit the cafeteria.  Brown said feedback has been positive so far.

“From what I have observed, students are excited about the dining hall being renovated,” he said. “They’re really happy to see that we’re putting our best foot forward in that area.”

Freshmen Samantha Fare and Matthew Surden, regulars at J&H, both said they are happy to see the overdue upgrades.

“I come in here a lot when it’s busy,” said Fare, a pre-pharmacy major.  “We usually have to sit all the way in the back corner.”

A fan of the occasional omelet station, Fare said she is excited to see it become a permanent fixture.

“I think it’s going to be good for the cafeteria,” said Surden, a journalism major, adding that the larger areas will help the flow of traffic at the food stations.
Kristenne Perelion, a freshman accounting major, echoed the need for a change, saying the cafeteria “is kind of dull as it is.”

“It looks more like a real cafeteria,” she said, commenting on the blueprints.  “And it looks really stylish – a good upgrade.”

Chris Stover can be reached at stover@temple.edu.
Staff writer Kurt Hirsch contributed to this report.

Temple has provided an education to be proud of, but it has stumbled along the way.

Beginning in the fall, all freshmen will be required to take Temple’s new general education courses in replacement of traditional core classes. Ongoing students will also have the opportunity to take gen-ed courses to fulfill