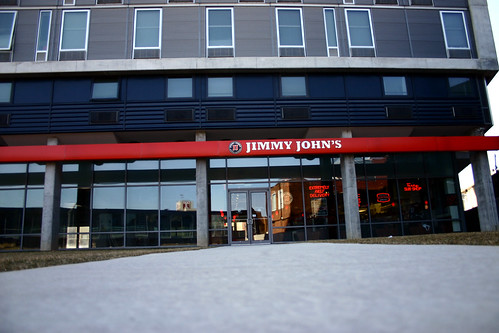 When owners of nationally acclaimed Jimmy John’s Gourmet Sandwiches opened up shop on Temple’s campus last semester, they expected the same success the chain has seen on other campuses.

But unlike their fast delivery, business has been slow.

Marc and Emily Gondek opened the franchise on Sept. 18, 2007, at the base of the Edge, at the corner of Cecil B. Moore Avenue and Broad Street. Since then, they have established a customer base, but have not seen any significant growth.

“Our customer base is very loyal,” Marc said. “We’re just trying to get more customers in here and build awareness, not just of the Jimmy John’s brand, but also of what’s going on on this
part of campus.”

The first Jimmy John’s was founded by Jimmy John Liautaud in 1983 in Charleston, Ill., and has since opened more than 660 locations across the country and is projected to open 500 more by 2009.

The chain is especially successful on college campuses, the Gondeks said. Currently, there are two locations in Philadelphia, including the location on Main Campus.

The Gondeks said they have attempted to promote their store in almost every way they know how, including sponsoring Temple Athletics, advertising in the Liacouras Center and handing out free samples in residence halls. In the spring, the owners said they plan on starting a weekly open mic night.

“We know that this is a proven concept,” Marc said of their product. “It had its beginnings on college campuses. The one thing that I can’t possibly fathom is that Temple students would be any different from students all over the country.”

While the Gondeks recognize that attracting business is mostly their responsibility, they said they believe that Temple should have an interest in raising awareness on their behalf.
“We moved here from Chicago and we chose to make Temple our home,” Emily said. “I really feel that if the university is focused on developing this part of campus at the Edge, then I think there should be more effort to raise awareness.”

Ray Betzner, director of university relations, said there was no established representative to deal with shops located off campus.

“They’re independent shops,” Betzner said. “So naturally, there isn’t anyone at Temple who is responsible for them.”

Jimmy John’s is not the only shop along this strip that is having trouble getting noticed by students and faculty.

“We’re all very good friends and they share similar challenges,” Marc said of the other owners. “I think we have a little more success in driving the business just because of the concept. We all think we’re diamonds in the rough here.”

Randy Johnson, a junior international business and finance major, had to have the shop pointed out to him.

“I think its just such a weird location.” Johnson said. “People who live in the Edge go to it, but for most Temple students, it’s just not that noticeable.”

“I heard about Jimmy John’s yesterday. They came to our office to advertise,” said Qingyan Ma, a graduate anthropology student, as she stood just a hundred yards away from the store. “But I don’t know where it is.”