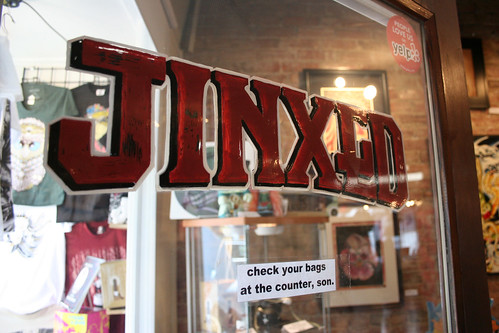 These are the qualities a store needs in order to be successful, and they’re taken to an entirely new level at the South Philly boutique Jinx ed.

Located at 620 S. Fourth St., just a block away from South Street, Jinxed is a small, cozy shop that offers one-of-a-kind gifts, clothes and art.

At first glance, it seems like just another artsy, funky haunt for the hipster generation – a one-stop shop for the skinny-jean, ride-a-bike-to-work types. Its individuality feels manufactured and its style stale.

Upon closer look, however, Jinxed’s authentic eccentricity and oddity shine through. The pieces of art on the walls are hung among somewhat frightening-looking vinyl toys. T-shirts hang from windows alongside eclectic and humorous books.

Store owner and operator Mike Supermodel is also full of character. Supermodel, 35, who launched the store five years ago, said he decided to open up shop simply because there was nothing like his store in Philadelphia.

“I grew up in Philly. I had done a lot of traveling and saw this kind of stuff in San Francisco and New York, but there wasn’t anywhere in the city that had it,” Supermodel said. “That, and [I opened the store because I wanted] money.”

His seemingly apathetic and nonchalant attitude about a topic that he obviously cares about epitomizes the endlessly cool and down-to-earth nature of Jinxed. Supermodel said people visit the shop “because we’re awesome.” And pretty out there, too.

Jinxed carries a wide array of toys and figurines that are – in a word – strange. Behind glass counters stand limited-edition dolls of colorful creatures that wouldn’t look out of place on Comedy Central’s Drawn Together. They sell toy versions of the characters featured on Kid Robot sweatshirts, which look more like monsters, and stuffed animals called Uglydolls. These little critters line the bookshelves of the store, staring down at customers with a certain giddiness and volatility.

The toys, in the larger context of the store, are more than just toys – they’re viewed by collectors and fans as art, and some cost up to $150.

“These are created by designers for [people who want] something different than another toy,” Supermodel said.

While the toys are unusual enough to attract attention, what makes Jinxed truly unique is its selection of clothes. Jinxed sells graphic T-shirts in a variety of colors and designs. These shirts wouldn’t seem out of place on a Cecil B. Moore Avenue skateboarder – and yet a fan of hip-hop could wear them, too. The shirts have an aspect of grunge, but also an air of modern chaos – much like the brands Obey and RVCA. Designers and artists create most of the motifs, Supermodel said, and that is obvious in the audacity and daftness of their creations.

One T-shirt features an image of Saddam Hussein that says, “Don’t hate the player, hate the game.” Another consists of the word “HATE” in the place of the “LOVE” from Philadelphia’s LOVE Park. They also carry a shirt that features the iconic Misfits skull patterned with a Louis Vuitton-inspired print.

These shirts are special, mainly because they’re made by Jinxed, and also because they sell them in places as far away as Hawaii and Canada.
The individuality and sheer exclusivity make Jinxed a hot stop for any T-shirt aficionado.

“I get tattooed next door and saw it, and I’m not into the whole corporate T-shirts thing, [but] I like having the most unique collection of all my friends,” Michael Abamon, 25, said.

Jinxed also carries vintage handbags and handmade accessories. The vintage purses are hung on a coat rack and have a current yet classy feel, sold for the reasonable price of $8.

The art, which hangs from exposed brick-and-white walls, is modern and urban. Jinxed sells pieces that are huge as well as ones that are tiny, like a series of postcards by Glenn Barr that run for about $20. The piece “Rancid Meat” first looks like a pink heart, but upon closer inspection, it is indeed a 3-D sculpture of rancid meat, complete with maggots.

In Supermodel’s opinion, Jinxed offers “everything you could possibly want.” Of course, this isn’t quite true – but at Jinxed, customers can find T-shirts that make statements and books that inspire laughs, along with madcap and distinctive artwork that falls way outside the sphere of corporate influence.

AMBLER — Juniors Wilbert Brinson and Brian Sanford used Saturday’s Cherry and White intra-squad game to conclude a progressive spring for them on the defensive side of the ball. Sanford, a 6-foot-2 defensive end, scored

Part four of a multi-part series. Renowned sports bar and restaurant Chickie’s and Pete’s gets all the hype when it comes to watching the Phillies, especially given its proximity to Citizen’s Bank Park. But the