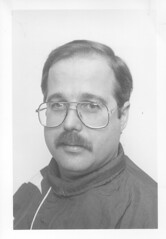 As of press time, The Temple News was unable to confirm the cause or location of Anderson’s death, although current women’s gymnastics coach Aaron Murphy said Anderson had battled a rare form of cancer for the last 18 years.

Anderson, a two-time Atlantic Ten Conference Coach of the Year, is the all-time winningest women’s gymnastics coach in school history, compiling a 235-272 record in his 20-season tenure with the Owls.

“He was, and is, Temple women’s gymnastics. He will be greatly missed,” Murphy, who served as an assistant under Anderson for four seasons, said in a statement.
Murphy first met Anderson when he walked onto the men’s gymnastics team in 1996.

“He always came to work with a smile on his face,” Murphy said.

Much of Anderson’s success came in his first seven seasons with Temple, as the Owls posted winning records during all but one of those campaigns, including a program-best 20 victories in 1989 and 1992.

During the 1992 season, Anderson led the Owls to the NCAA Championships. He also guided his team to five USAG National Championships and seven appearances in the NCAA Regionals.

Prior to arriving at Temple, Anderson served as assistant women’s gymnastics coach at Southern Connecticut State and Massachusetts.
The Northport, N.Y., native was a two-time All-American gymnast at Southern Connecticut, where he graduated with a bachelor’s degree in sociology in 1978. He earned a master’s of science degree in urban education from the school in 1982.

“They were heartbroken,” Murphy said. “There were a lot of tears shed.”

In a statement, Temple Director of Athletics Bill Bradshaw said: “The entire Temple community is saddened by the loss of Ken Anderson. He was a special man, who gave so much of himself to Temple Athletics.”

Anderson, a resident of Drexel Hill, Pa., is survived by his wife, Debra, daughter, Melissa, his parents, a sister, a brother, aunts and several cousins.
A memorial service for Anderson was held Monday at the Toppitzer Funeral Home on 2900 State Road, Drexel Hill, Pa.

Hip-hop is an imperfect, but charming, language. It is derogatory toward women, it thrives off power, sex and money, and it’s all one big bleep after all obscenities are taken out. But what great cultural

A snug fit within the cozy community of Rittenhouse Square, Rum Bar carries rum in countless distinctions that hail from across the Western hemisphere.