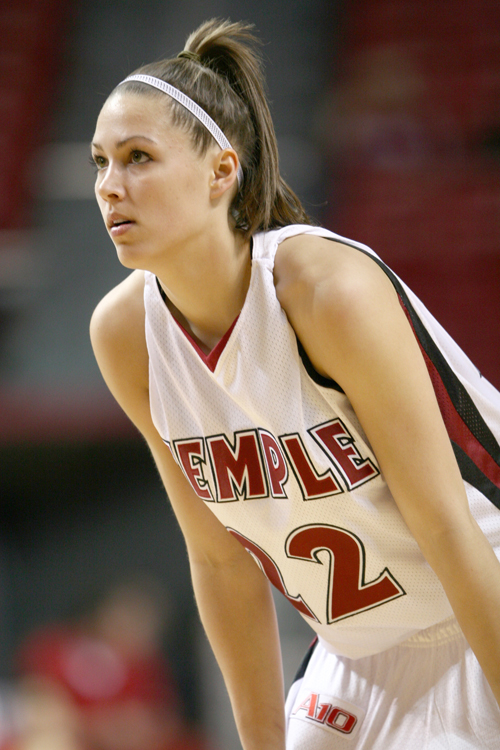 Lindsay Kimmel does not like to start basketball games on the bench.

But she, like most others, had to do it. The freshman guard worked hard enough to earn a spot in the starting lineup at the end of last year.

“Really, at first, sitting on the bench – just nobody likes to sit on the bench. To me, it was I have to work for it and I knew I had to earn it,” Kimmel said. “But I’m starting now. It’s a little bit easier as a shooter, but I really did have to earn it.”

Coach Dawn Staley has no reservations about starting Kimmel in games now. She is averaging 5.3 points per game and is second on the team in three-pointers made, shooting 35 percent from long distance.

Since entering the starting lineup in the Owls loss to Dayton on Jan. 12, Kimmel is scoring 8.7 points per game compared to the 3.8 points she averaged coming off the bench.

“Lindsay wasn’t ready to start in the beginning of the season, but I think, in order for a freshman to have success and confidence, you have to put them in the right situation. She had to learn how to play college basketball. I think she’s a little bit better than what she was 20 games ago,” Staley said. “She’s someone who has to really play in order for her to learn.”

The transition from high school to college basketball was not that daunting of a challenge for Kimmel. In her senior year at Harpursville in Binghamton, N.Y., she led the league in scoring and averaged 30.5 points per game. She also played for a competitive AAU team that prepped her to be as aggressive as she needed to be to play for the Owls.

“The transition from AAU to college is still different. All the stuff you’re learning and all the coaching techniques are different, but I love it,” Kimmel said.

In the short time that she’s started, Kimmel has already established her presence on the court as an outside, three-point shooter. In the 23 games she’s played in, Kimmel has already racked up 123 points, most of those coming from the outside. Kimmel said she’s comfortable with getting her points outside of the paint.

“There are some plays where they’ll post me up, I mean the paint really belongs to Lady [Comfort]. They’re doing their thing in there, no reason for me to get in there right now,” Kimmel said.

Staley has been pleased with Kimmel’s play so far and expects even more from her game in the future.
“Lindsay’s just refreshing to have because I don’t think we’ve had a bona fide shooter like Lindsay who is able to open the floor up for our post players to have enough room for them to do what they do best, which is score with their back to the basket,” Staley said. “I expect Lindsay to be more well-rounded because people are going to look at her probably from here on out just as a three-point shooter.”
Staley said she has much more to offer than just shooting the ball, noting that Kimmel is a good passer and also defensively sound.

This season, Kimmel is getting a little extra help from one of the players on the men’s team. Her relationship with sophomore guard Ryan Brooks has helped her to stay focused on basketball. The two players practice one-on-one with each other and they both support the other at home games. She said their relationship has not put a strain on her performance on the court.

“We’re both excited for one another,” Kimmel said. “We both understand that school and basketball come first. It’s not a mental block or anything. We both play fine whether the other is there or not.”
Last season, Brooks, who was the first player to be signed by second-year coach Fran Dunphy, appeared in 24 games, averaging 10.1 minutes and 3.1 points per game. He is averaging 8.4 points per game while shooting 32 percent from the three-point line this season.

Brooks said he is happy to see Kimmel in the starting lineup and enjoys going to watch the women’s games to see her play.

“She’s improving a lot, especially defensively. I always told her, ‘You’ve got to start playing defense’ [and] ‘just settle down.’ I think once she got into the starting lineup her confidence just went up and you see that her shooting percentages are going up, she’s scoring a lot more and she’s playing even better defense,” he said. “I think the coach gave her an opportunity out there and her confidence is sky high right now.”

Melissa DiPento can be reached at melissa.dipento@temple.edu.
Sports Editor Tyson McCloud contributed to this report