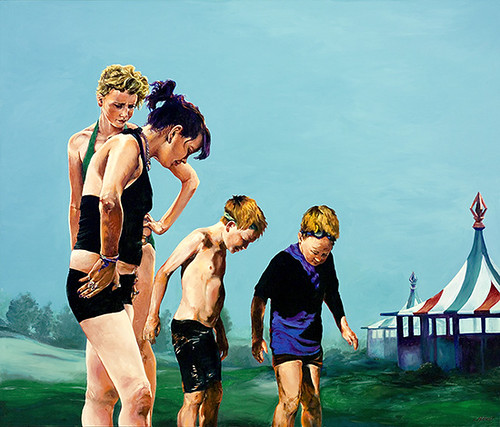 The Guns N’ Roses lyric “take me down to Paradise City” may not traditionally refer to Philadelphia, but next week it will certainly be applicable.

The city has always been known for its dedication to the arts – Broad Street, for example, lives up to its name as the Avenue of the Arts, with numerous theaters, galleries and musical venues lining its sidewalks. Another credit that Philly can add to its resume is its role as the temporary home to America’s No. 1 art fair.

Founded in 1995 by two Philadelphia-area artists, Geoffrey and Linda Post, the Paradise City Arts Festival was first held in Massachusetts. Since then, the Posts have worked to expand the festival and build up its name and reputation. Five years ago, they brought it to the Valley Forge Convention Center in King of Prussia as a tribute to the city’s history of supporting the arts.

This year’s Paradise City Philadelphia “features a diverse and exciting selection of one-of-a-kind works in painting and sculpture, wearable art and jewelry, ceramics, art glass, studio furniture and home furnishings,” according to its Web site.

Teapots, believe it or not, are one of the main highlights of the festival.

The Teapots in Paradise exhibit features an array of unique teakettles, some of which resemble those found in traditional silver sets, and others that are oddly shaped and decorated. The teapots are made from other materials aside from just metal, including ceramics and blown glass.

Linda is most excited about showcasing the teapot artist Noi Volkov at this year’s festival. Volkov finds inspiration in literature and pop culture – Post mentioned that one is made to look like Elvis Presley.

An increasing interest in creatively redesigning the teapot is not unique to this festival, however.

“There has actually been a national swell of interest in teapots,” Post said. “We’re now up to more than 30 [submissions] in every media.”

After admiring the collection, festival goers can relax and enjoy “Afternoon Tea,” served each day at the Paradise Café. 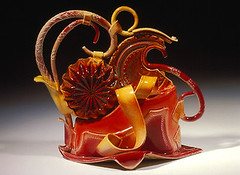 When guests are finished dining, they can wander through Paradise City’s impressive, expansive Sculpture Garden, which features art by glassblowers, metal sculptors, stonemasons and ceramists. This staple of the festival actually took off thanks to Linda’s landscape-loving brother-in-law.

Martin Nosowitz, who lives on the Main Line, built a giant greenhouse in his backyard that now holds orchids, geraniums and begonias in addition to other assorted plant-life. This avid horticulturalist is the designer of the Sculpture Garden.

“The concept of Paradise City’s Sculpture Garden is visualization. It helps people picture fine and functional art in their homes and landscapes,” Post said. “It also creates a natural dialogue at the show between the artists and beginning collectors of artist-designed work.”

Festival goers should be warned, however, that they might not always see the most serene pieces in the garden.

“Last year’s installation had Lisa Fedon’s steel armature of a life-size horse wrangling with Dale Rogers’ 12-foot COR-TEN steel ‘American Dog’,” Post said.
The festival will feature 125 select artists from 25 states. Locals artists like Rona Fisher of Philadelphia and Emily Gartner of Bethlehem will also be traveling to 33rd Street to show their work at the fair.

“There are lots of people who go out of their way to find artisan-made jewelry,” Fisher said. “As an exhibitor, I look forward to making contact with people who are not only interested in the arts, but who enjoy buying pieces that are well-made and different than the norm.”

Gartner makes handbags made out of album covers, playbills and LPs. Some of her designs feature images from Broadway shows, children’s shows and cartoons – or the faces of political figures and major athletes.

A dedicated creative spirit, Gartner appreciates that this arts fair forces her to think differently about her handbags. She has even entered works in the teapot exhibit; look out for one with images from Lewis Carroll’s Alice’s Adventures in Wonderland.

Other notable artists who can be found at the fair are jewelry designer Jennifer Jordan Park, who makes graphic cloisonné jewelry, and the illusionist painter Vitek Kruta.
“If you want to be on the cutting edge of who’s who in the art world, you’ll be able to talk to them in person at this show,” Gartner said.

Frances McInerney can be reached at fmcinerney@temple.edu.

In an effort to help students balance their time in the classroom and extracurricular life, the Office of the Provost announced new guidelines for students who participate in university recognized activities. Activities including but not