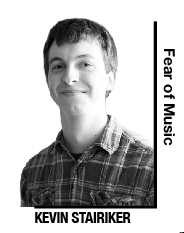 Columnist Kevin Stairiker says there are some love songs worth listening to on Valentine’s Day.

I have mixed feelings about Valentine’s Day.

To have anything more than a passing like or dislike about any sort of holiday is probably in poor taste anyway, but people can get completely crazy about Valentine’s Day. Some people love it and a lot more people hate it. Can you imagine getting super worked up about Arbor Day? Of course you can’t.

The one thing that V-Day has going for it that I can always get behind is the influx of love songs that seem to crawl unabated from every crevice and dusty shelf that they called home the other 364 days of the year.

It should come as no shock that I am a complete sucker for a well-crafted love song. Fortunately, and sometimes unfortunately, they come in all shapes and sizes. Let’s take a look at four different love songs that could either make you feel all warm inside like a freshly baked cookie, or, conversely, make you want to stick tiny pins in your eyeballs until you bleed into your mouth and choke and die. Either way, you’ll hopefully be tapping your feet.

Big Star’s “I’m In Love With A Girl” sounds like an outtake.

On an album that featured full-band, power pop classics, the last track seems like an afterthought, out of place and accidentally tacked on. But the less-than-two-minute ode to whoever happened to be on Alex Chilton’s mind at the time is entirely fleshed out in its nakedness.

With just an acoustic guitar and some heavenly high notes, Chilton achieved what thousands of whiney kids in tight jeans in the ensuing decades proved that they couldn’t:  He got right to the point without sounding, well, all lame about it. Entirely meaningful without being overwrought, “I’m In Love With A Girl” is both universal and timeless, and you better believe it deserves a spot on your Valentine’s Day mix.

Unfortunately, there are some that could never get behind the genuine sweetness of Big Star. Thankfully, The Tallest Man On Earth has got those of you covered.

Amongst talk of blizzards and sparrows, his debut album “Shallow Graves” features a track by the name of “The Gardener,” and it’s a doozy. The concept of the song is that the protagonist hears about people planning to warn his love of his past indiscretions, so he kills them and buries them in his garden, all so that he will remain the perfect man in her eyes.

Let’s just take a second to think about how great that is.

It’s a perfect Valentine’s Day song for those more on the morose side. In fact, maybe we as a culture need more mainstream love songs that have their roots in murder and death. Thankfully, “The Gardener” is good enough to satiate that need for a while.

In an entirely different realm, there’s a little jam called “Stuck With You” by Huey Lewis and the News. And before you smugly twist your little moustache, yes, it really, really is a good song.

Scrub off the ‘80s gloss and you’ve got yourself a pretty frank look at middle-aged married life, which is generally not good fodder for pop music. The song can be summed up as Mr. Lewis stating to his wife, “Listen, our best years are way behind us and we’ve both grown depressingly dependent on each other, so it’s probably in our best interests to remain together until one or both of us gets thrown into the fancy ditch we’re destined for.” Thrown behind that blazing keyboard, you just can’t lose.

“We need lyrics in our songs so that we can pretend that we can relate to the purposefully vague sentiments written purely to sell singles on iTunes,” cries the strangely well-informed masses.

While the pros and cons of instrumental songs can be argued throughout time, there is at least one that isn’t up for debate: Johnny and Santo’s 1959 classic “Sleep Walk.”

Back when it was totally acceptable for instrumental songs to top the Billboard charts, “Sleep Walk” doubled as a perfect showcase for the lap steel guitar, and also as a perfect slow-dance song. I dare you to throw that song on with someone of the opposite gender within a 10-foot radius and try not to make out with them purely based on the magnetism of the song alone. If it had been played at sixth grade dances between “Hey Ya!” and “Get Low,” I probably would’ve asked a girl to dance, but that’s for another column.

Obviously, there are songs that will haunt me in my sleep because I didn’t include them here. If you’re looking to fill up space on your last-minute Valentine’s playlist, try “Eye Know” by De La Soul, “Dress Sexy As My Funeral” by Smog, or “T.V. Girl” by Beat Happening.

But I can only help you so much. Valentine’s Day is supposed to be about the thought you put into making the person you care about happy, or so I’ve been told. It might just be about necklaces. Either way, don’t let your special little Hallmark-First-Quarter-Profit-Margin-Revitalization-Day go without some quality tunes.

“(Sweet Dreams) Are Made Of These”- Marilyn Manson

“He Hit Me (And It Felt Like A Kiss)”-The Crystals

Kevin Stairiker can be reached at

‘Swipe right’ for a mismatch

A student describes her experience with online dating, doubting its effectiveness.

Trocadero Theatre and Howl at the Moon are against Valentine’s Day.

Love.Fashion.Murder gives Valentine’s Day “the finger” with a fashion show and dance party.