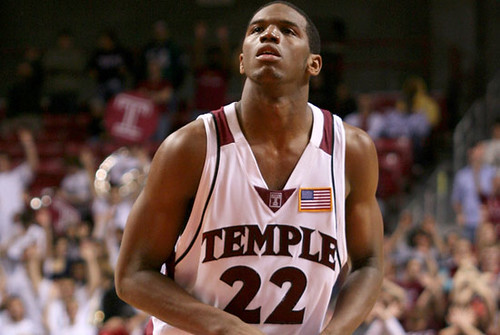 Holding a 19-point lead over the No. 20-ranked team in the nation with less than a minute remaining, Temple senior guard Mark Tyndale dribbled out the clock as the men’s basketball team received a standing ovation from the crowd at the Liacouras Center.

No one could’ve seen this one coming.

The typically up-and-down Owls shot the lights out to upset No. 20 Xavier, 78-59, in front of 4,071Wednesday night. It was Temple’s first win over a Top 25-ranked opponent since the Owls defeated No. 6 George Washington in the Atlantic Ten Conference Quarterfinals on March 9, 2006.

The win, undoubtedly the most significant of second-year coach Fran Dunphy’s tenure, was highlighted by a second half offensive outburst from Temple. The Owls (7-8, 1-1 A-10) shot a blistering 58.6 percent from the field in the second half, outscoring the Muskateers, 48-32, after halftime.

“I thought we played about as good as a basketball game as we could play on both ends of the court,” Dunphy said. “We stepped up and made big shots. On defense, I thought we payed attention to detail. We’ve been asking guys to do that and, for the most part, we did that tonight.”

Sophomore guard Dionte Christmas scored 19 of his team-high 23 points in the second half to help spark the Owls to victory. His backcourt teammate, Tyndale, added 22 points but the Owls received key contributions from other players as well.

Sophomore guard Luis Guzman, who scored the first six points of the game for the Owls, finished with 13 points on 5-of-7 shooting. Junior center Sergio Olmos grabbed 10 rebounds and blocked four shots, while sophomore guard Ryan Brooks chipped in with 10 points and six rebounds in 31 minutes off the bench.

It was the type of all-around effort that the Owls failed to make in their three losses to ranked opponents – Tennessee, Villanova and Duke – earlier in the season.

“Instead of playing one half of basketball,” Christmas said, “we put everything together.”

The Owls established a 23-19 lead with nine minutes, 10 seconds left in the first half on an 11-2 run that began once sophomore guard Ryan Brooks entered the lineup with 13 minute remaining. Temple entered halftime with a 30-27 advantage and didn’t falter once the second half commenced.

After exchanging the lead with Xavier a couple of times at the start of the second stanza, the Owls took the lead for good after Christmas nailed a three-pointer to give Temple a 42-41 advantage with 14:05 remaining.

From there, the Owls expanded their lead to as much as 22 points behind seven second-half three-pointers.

The Owls sank 13-of-27 shots from deep range, tying their season high in three-pointers made.

The victory will serve as a major confidence booster for the Owls after losing a close game against Charlotte, 60-58, on the road Saturday.

“We came off a tough loss the other night and I think we deserved this as a team,” Tyndale said.

“This win was real big for us, man,” Christmas added. “I think the confidence level on our team is at the top of the roof now.”

“Hopefully,” Tyndale said, “he’ll cut back on the cussing at practice”

Tyson McCloud can be reached at Tyson@temple.edu