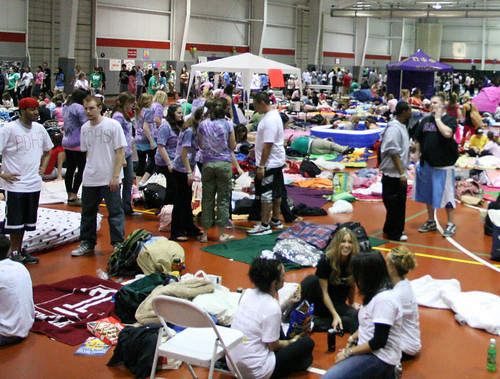 More than 1,000 students spent the night packed into Temple’s Student Pavilion on Friday to take part in the university’s fifth-annual Relay for Life to raise money for cancer research.

While the focus of the event is supposed to be a relay that has teams walking throughout the night, participants also danced, sang and had a good time in the party-like atmosphere. (Watch the Video)

The fundraiser, which is organized by the American Cancer Society, was started in 1985 and takes place nationally in different communities and schools between March and June.

Beth Davis, the event chair and a junior public relations major, said the proceeds will be counted over the next few days as cash raised through the night and money that continues to trickle in from late donors is added in.

Megan Drollinger, a fundraising specialist for ACS, said there is still “so much more potential to make a lot more.”

During the opening ceremony, Temple men’s basketball coach Fran Dunphy said he was proud of Temple and its students.

“Young people like you are going to make a difference in today’s world and in the fight against cancer,” Dunphy said.

He also mentioned the Coaches vs. Cancer program, through which Temple was able to donate $250,000 to Hope Lodge, a program the ACS runs that enables cancer patients and their families to move closer to hospitals during treatment.

Amid the speeches and announcements of the opening ceremony, cancer survivors and caregivers were met with cheers and applause as they took the first lap around the three basketball courts making up the pavilion’s track.

The night’s theme of “Decades” brought in a cavalcade of colorful outfits. The sorority Delta Zeta dressed entirely in bright ‘80s aerobic attire.

“We figured it would be the most comfortable gear to walk in,” said Becky Davis, a junior secondary education major.

Davis, Delta Zeta’s philanthropy chair, said the sorority has also done services with the Pennsylvania School for the Deaf, as well as the recent Philly Cleanup.

Tyler Bourgoine, a sophomore international business major and the community service chair for Tau Kappa Epsilon, said his fraternity was there to give back to the community.

“If it’s going to give back to cancer research, it’s worth it,” Bourgoine said.

Different activities were scheduled throughout the night, including salsa dancing lessons, a water pong tournament and a talent show.
Around 9:15 p.m., students filed out of the pavilion and onto the adjacent tennis courts for the candle lighting ceremony. Rain began to fall on the silent crowd as they listened to an arrangement of “Hallelujah” performed by Temple’s all male a cappella group, Broad Street Line.

The next morning, a quick closing ceremony was held as students began to leave, officially letting participants know that the event was over.

“Overall, [there was] definitely a lot of improvement from last year” despite the late start in planning, Davis said.

She said that staff changes had kept plans off track, but that 20 dedicated committee members had helped to make the event happen.
“Next year, we’re hoping to start in October so we’ll be able to have more time for preparation and donations,” Davis said.

On the other side of the city, the University of Pennsylvania raised nearly $150,000 during its Relay for Life campaign, tripling Temple’s goal.

Davis said she still considers this year a big success, and that next year, they will “hopefully [have] our numbers increased and [get] more of Temple involved.”

Kriston Bethel can be reached at kbethel@temple.edu.

Hundreds pull all-nighter for good cause

Across Pennsylvania college and university campuses, political momentum has been picking up. On Friday, Sen. Hillary Clinton addressed a crowd of 1,000, mostly college-aged supporters and voters on the campus of Drexel University. Philadelphia Mayor