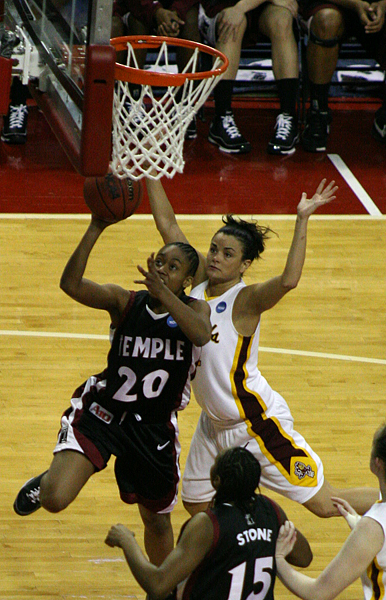 COLLEGE PARK, Md. — After 21 wins, 13 losses and countless practices, road trips, meetings and weight room sessions, it was all over.

The 11th-seeded women’s basketball team’s season came to an end Sunday in a 61-54 loss to No. 6 Arizona State in the first round of the NCAA Tournament at the Comcast Center.

With the score tied at halftime, the Sun Devils began the second half on a 13-0 run and never looked back as they held off a late Owls charge and advanced to the second round of the tournament to face No. 3 Duke.

“I thought we lost it on the defensive end,” coach Dawn Staley said. “I think it was more so of just a little mental breakdown defensively… But we got beat by a very good basketball team that kept the pressure on us all night.”

Senior guard Ashley Morris led the way like she’s been doing all season, notching a game-high 21 points in her final contest in Cherry and White. Senior center Lady Comfort added 11 points and five rebounds, but no other Owl reached double-figures and the team turned the ball over 19 times.

But despite the loss, the Owls still had a fairly successful 2007-2008 campaign.

Picked to finish fourth in the Atlantic Ten Conference preseason poll, Staley’s squad defied the critics and finished in a tie for first place with George Washington. They advanced to the A-10 title game and received the program’s second consecutive at-large bid to the NCAA Tournament.

Led by Morris, who finished the season averaging 15.2 points per game, the Owls certainly surpassed expectations.

“We never doubted ourselves,” Morris said. “We knew we had the group to [make the tournament] and get this far, and we even thought we would go further. So I don’t think we ever fed into what people were saying about us.”

While that kind of mentality, along with that kind of leadership, helped the Owls this season, the focus now shifts to next year.
With Morris and Comfort exiting, new players will have to step up to fill key roles —both on and off the court.

“You’re going to have to [dig deep] to find something in order for us to be effective next year, because [Morris] was it this year,” Staley said. “So hopefully our players will come back and this sour taste that’s left in our mouth will force them to do a little more in the offseason.”

“I’m just going to look to the future,” Comfort added. “Keep trying to play basketball somewhere for somebody.”

For Staley, she is undoubtedly upset in losing two players that have been with her for four years. But at the same time, she knows that they’re ready to move to the next level of their lives.

“They’re going to be an asset to another company or a basketball team,” Staley said. “And I’m proud to know that they wore this Temple University uniform proudly. They did us proud, and I’m sure when we look back ten years from now, they’re going to continue to make us proud.”

The football program had its first first-round NFL Draft pick since 2011, the women’s basketball team made the NCAA Tournament and the men’s soccer program played its final season under David MacWilliams.

There is no reason a competitive team like Temple can’t have a more substantial schedule. The team and the fans will lose out.

Just ‘friends’ for 10 years: it could be the real thing

With graduation quickly approaching and the realization that I am not with “the one” I will marry, I cannot help but wonder what guy will one day become my other half.  Whether it was middle