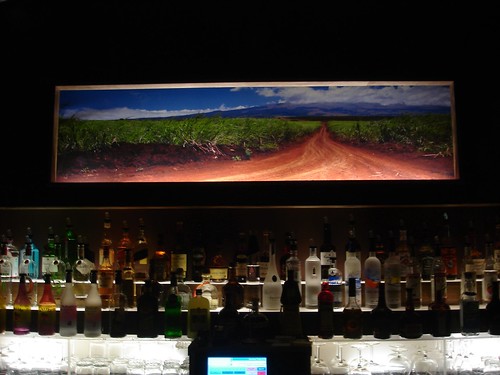 A snug fit within the cozy community of Rittenhouse Square, Rum Bar carries rum in countless distinctions that hail from across the Western hemisphere. The bar also provides a light but growing food menu and a jovial atmosphere.

Lingering in the interior are the common residues of Philadelphian post-industrialism: exposed brick, painted tubing and minimalist light fixtures. The motif, however, is island-like while remaining polished and warmly adorned with burnt Tuscan colors.

The entrance is guarded by a genuflecting pirate statue that owner Adam Kanter won off eBay. Although he bears a striking resemblance to the icon, he is not Captain Morgan. The statue does, however, foster the popular association of pirates with the imbibing of rum and is a bold addition to the character of the restaurant.
Kanter said rum is currently the fastest growing liquor in the world.

The beverage menu encompasses a little more than a hundred rums categorized according to varying shades and vintages: light, gold, dark, specialized and flavored, sugarcane and Anejo. The rums are also used to mix their tempting mojitos and cocktails, such as the velvet, key lime and raspberry mojitos, as well as others like the Strawberry Ginger Caipirinha and the White Sand Lemonade.

A rather intriguing and lucrative feature: one can acquire a ‘Rum Passport’ free of charge. This proposes a tasting of all of the rums on the menu at the patron’s convenience. Upon finishing, one is awarded a bottle of a fine vintage, valued around $250.

Also available is the option of a flight, which is a tripartite set of wines or spirits organized either horizontally or vertically. When a flight is ordered vertically, samples are arranged annually from youngest to oldest, while horizontal flights work from lightest to darkest in correspondence to fermentation elapse and recipe specifications.

Since the immensity of the menu can be overwhelming, flights are meant to detail subtleties by process of comparison and provide some grounding for future indulgences.

“It’s probably the most versatile liquor out there,” floor manager Brianna Berry said. “It’s great. I can go to Reading Terminal and pick up, say, prickly pears, come back and make a prickly pear rum-infusion in about a day’s time.”

Infusions in general are made by allowing one or more ingredients to steep inside a sealed container. Rum infusions are easier and faster to make than other infusions – the sugar content assists in sealing the flavors. Two infusions commonly used in both their cocktails and dishes are chili pepper and cucumber.

The menu is a round-up of Caribbean staples rationed as share portions. Everything is kept simple, but is executed with a refinement that puts this pub a few steps above the competition.
The jerk seared scallops ($12), nestled on a bed of creamy pineapple risotto, reminded me why some dishes are called “comfort foods.” I also sampled the Ahi tuna ceviche ($9), dressed plenteously in lime with avocados, tomatoes and capers. It was not the freshest tuna. I felt as though the only thing that saved it from tasting too bold, which it never should, was the high content of lime.

The guacamole ($7) was very tasty and in perfect proportions, but the homemade tortilla chips shined as the highlight of the dish. Usually an afterthought, the chips were freshly baked and dashed with just a hint of salt – they could have sufficed as an appetizer all to themselves.

The seared flank steak ($11) was marinated with chili-infused rum, stuffed with a tangy goat cheese, and drizzled with a teasingly luscious pinto bean sauce and a mango salsa to boot. Tender and rich, each bite begged me a moment to savor it.

To top off this brand new world, the rum-infused desserts married with a snifter of Black Strap rum from St. Croix laid the foundation for my next visit. Never before have I tasted rum that was so light and airy. It dissipated right off of my tongue, leaving me with a relaxing sensation I have yet to experience with other spirits.

Although the rum is the main attraction, I was impressed with the quality of the food. In fact, if some minor menu elaborations were made, this already thriving gastropub could bud into a fully accommodating restaurant establishment.

Aaron Stella can be reached at aaron.stella@temple.edu.

Get a ‘Rum Passport’ to sample all of the rums on the menu and earn a bottle of a fine vintage, valued at $250. Also, make sure to try the guacamole and chips.

In 2009, Temple will spend more than $41,000 on scholarships for four Philadelphia School District students as part of the new Temple University Philadelphia Scholars program. Since beginning its capital drive in 2002, the university

There’s plenty of fun to go around this week – whether you have a valentine or not.