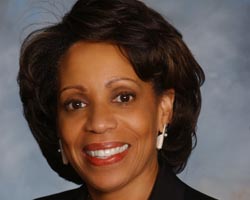 JoAnne A. Epps has been named the next dean of Temple’s Beasley School of Law, effective July 1.

The former associate dean will replace Robert J. Reinstein who will end his 19-year tenure when he steps down on Monday, June 30, hoping to return to teaching, according to a university release.

Epps, who specializes in trial advocacy and criminal procedure, will take over the law school, which boasts 64 faculty members, more than 1,200 students at Main Campus and more than 100 in the university’s law programs in Beijing and Tokyo.

She has been associate dean of academic affairs since 1989, primarily serving as a liason between Reinstein and the law faculty. She joined the law faculty in 1985, rising to full professor in 1994. Between 1980 and 1985, Epps was an assistant U.S. attorney for the Eastern District of Pennsylvania.

The first job for a 16-year-old Epps was as a cashier at Temple’s bookstore, and her mother was a Temple employee, according to the release.

Epps was the only law professor selected by the American Bar Association to travel to London to train Sudanese lawyers representing victims of the Darfur crisis. She has also taught in Temple’s law programs in Beijing.

Reinstein also served as vice president for international programs, but a replacement for that position has yet to be announced

Reinstein, the longest-serving dean among American law schools, served over expansive growth in the law school from 1989 to 2008. The law school’s endowment ballooned from $4 million to $57 million and faculty increased by 20 percent. This fall’s entering class has the highest academic record in the law school’s history, according to the release. Some 4,800 applicants, double what it was in 1989, compete for 300 roster spots.

In his role as vice president for international programs, Reinstein oversaw tremendous growth at Temple University-Japan and further developed Temple Rome into one of the top American study abroad programs. Reinstein, who joined Temple’s law faculty in 1969, served as a law professor and the university’s general counsel from 1982 to 1969. Prior to Temple, he was a contributing attorney for the NAACP and fought to integrate the Philadelphia Police and Fire departments, and other groups.

Christopher Wink can be reached at cwink@temple.edu

A new fellowship program has been initiated at the Beasley School of Law, as well as other Philadelphia area law schools such as Drexel University’s Earle Mack School of Law, Rutgers School of Law-Camden, Widener

Interim provost says he has no plans to keep the job