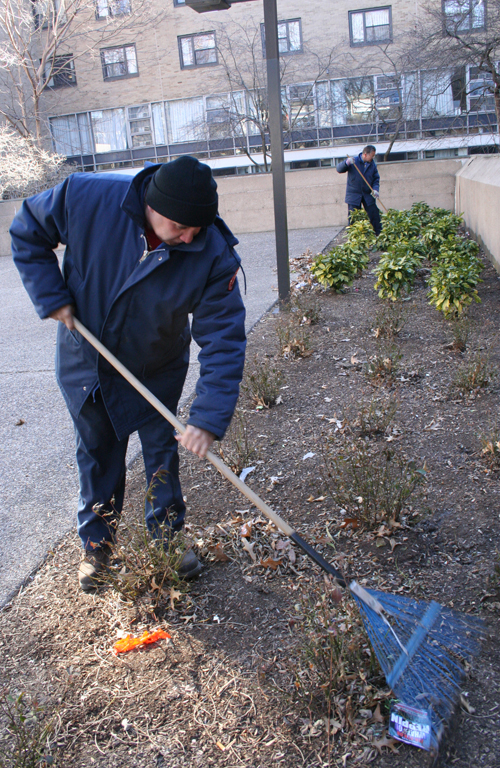 What do flowers, litter, snow, leaves, horticulture, flyers stapled to trees, the turf on the sports fields and that funny looking mega-vacuum cleaner that travels around campus all have in common?

The grounds department happens to be responsible for each one.

Part of the Support Services division of Temple’s Facilities Management, the grounds department is in charge of everything on Main Campus from trash pickup to landscape work, and seasonal jobs like snow removal, event setup and then some.

Growing as needed with the evolving campus, 17 able groundskeepers comprise the workforce, led by four experienced managers. It also offers work for students and currently employs 12 in addition to the staff.

Assistant superintendent of grounds Glenn Eck has been working for grounds for 11 years. Each day, he and fellow supervisor and sports turf manager Craig Roncase evaluate what needs to be done – and each day presents different challenges.

“I could come in with nothing to do and just keep busy all day with the phone calls that come in,” said Roncase, a fourth-year supervisor.

The managers hand out specific jobs to the groundskeepers, which are tailored to the tasks for that day. Calls from Facilities Management, Temple Police and many other sources also help to keep the groundskeepers to-do lists full.
“Today I’m on the ATLV, which is that big vacuum cleaner, but tomorrow I could be doing anything from weed wacking to cleaning,” groundskeeper Jason Leinhauser said. “Every day is different.”

While their tasks change daily, one factor seems to remain consistent – trash.

“The amount of trash varies by season, and so must our response,” Eck said.

Eck and the other groundskeepers said they consider trash – mostly littered by students – to be a huge drain on the department’s resources.

“It’s no secret that litter is a problem on campus, so we spend a lot of time picking up litter,” Eck said. “A minimum of seven groundskeepers will deal solely with cleanup for their eight-hour shift, and it will be a portion of the workday for most of the remaining staff.”

Although they acknowledge that trash is inevitable on an inner-city campus like Temple’s, the workers of the grounds department said they wish that students would stop throwing their trash – especially cigarettes – where it doesn’t belong.
“Cigarettes are probably the most disgusting trash I’ve ever seen,” Roncase said.

And for all campus litterbugs, Roncase has a message: “I believe this is yours.”
“Even the flower planters are used as cigarette and trash receptacles, which is really disheartening to those tending them,” Eck said. “The biggest thing that students could do more is to not make it dirty in the first place, and that would be a big help.”

Many of the student workers end up picking up the trash of their peers for $8 an hour.
“The students who work for us do the stuff the guys don’t [necessarily] want to do, but the stuff they don’t mind doing as [much],” Roncase said. “The workers appreciate and respect that.” 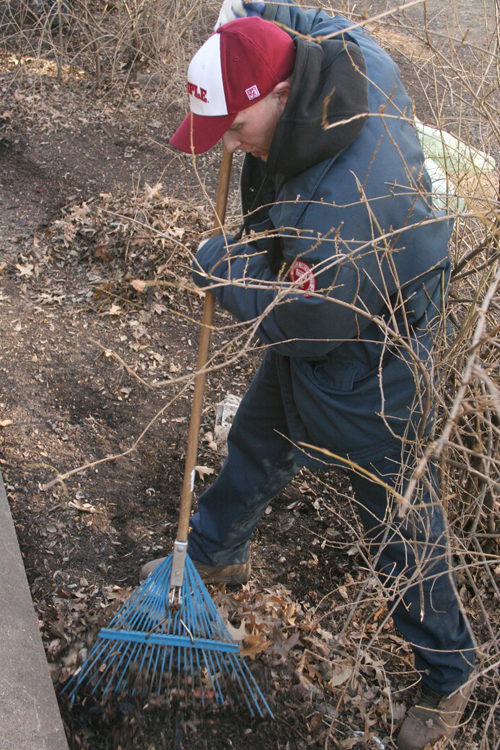 Despite the onslaught of debris thrown by students, the groundskeepers said they usually feel that students appreciate their work.

“During the springtime, I think the student body really does appreciate what we do, especially when they see all the flowers planted,” Leinhauser said.

But Punxsutawney Phil saw his shadow, and unfortunately the groundskeepers must endure at least six more weeks of winter.

“Try being on an ATLV for eight hours, especially on a cold day,” Leinhauser said. “Wintertime is my least favorite time of the year. It’s brutal and it’s hectic.”

“Weather dictates everything, whether it’s here or anywhere,” Roncase said.

To help predict the coming weather, the department subscribes to AccuWeather Pro, a commercial weather forecast that provides them with custom forecasts that are as detailed as possible.

And whether you’re on the schedule or not, if it snows and you’re a groundskeeper, you’re coming into work. Employees must report to campus upon first snowflake and remain until the last.

“The expectation is that when literally the first snow starts to hit the ground, we start,” Eck said. “We don’t wait until it’s over and then go out – we do it immediately and until it’s over. We’ve stayed here overnight. We’ve stayed two nights. There have been times the guys have been here a couple of days, slept here, and the whole nine yards.”

Though the winter months can get frigid, being a groundskeeper does have its perks.

“I love cutting grass in the summer time especially,” Leinhauser said. “You know, I’ve got my iPod on, just chillin’.”
For Leinhauser, the most rewarding part of the job is watching the lifeless dirt flourish into lively gardens. He also enjoys his role as union shop steward of the department.

“Shop steward is like the lawyer of the workers in the department,” Leinhauser said. “I love to argue – always have – and as shop steward, I get to defend my coworkers when they get written up for something.”

“The union makes sure my guys get paid well for what they do – enough to support their families. It’s good for them,” Eck said.

Even with their diligent staff, the grounds department would not be able to complete their daily tasks without the 100-plus pieces of machinery.

“We couldn’t do it with 17 people without the equipment we have, that’s for sure,” Eck said.

Some students were surprised by how many people are actually on staff.

Freshman marketing major Ryan Porter guessed there must be 250 working throughout campus. His roommate, freshman English major Anthony Gland, estimated a few hundred. They were stunned to find out the number is much lower.