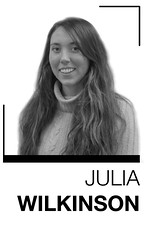 When I walked into Last Drop Coffeehouse about two weeks ago, I saw a painting with the words “Go-Bama! Handle Hitler like a grown-ass man!” Below the statement was the face of a one-dimensional Obama waving oversized brown fists at Hitler.

Another painting showed the president kneeling before a couple lying in bed, sprinkling blue teardrops toward them. The painted caption read: “Barack uses his magic tears to give men more staying power!”
Other paintings had similar themes: in one he is taking Christ off the cross, in another he is rescuing unicorns from Abu Ghraib.

While I thought nothing of it – it was just another white art school kid trying to be rebellious and funny – I overheard a black man tell an employee he found the paintings very offensive. 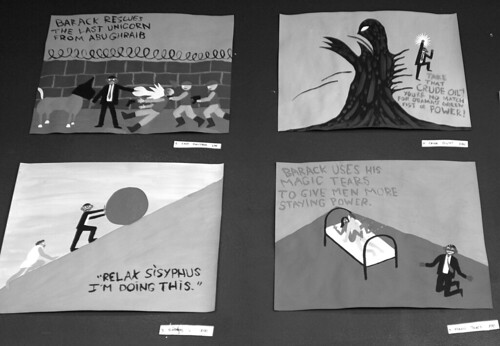 Controversial paintings in the Last Drop Coffeehouse have offended some patrons of the Center City shop (Julia Wilkinson/TTN).

The man, Gregory Walker, asked me if I was offended by the paintings. I was afraid to say that I wasn’t sure but was intrigued by why he was.

Walker cares about people. He is a tenants’ rights organizer and chairman for the Brothers Network, a member of the board of directors for the Washington Square West Civic Association and a member of the Liberty City Democratic Club.

He said while he found the paintings offensive, it was the fact they were in a public space that really bothered him. The display suggested to Walker that the coffee shop is promoting racism and anti-Semitism.

Nam Nguyen, owner of the Last Drop for 14 years, said he could see why people would be offended, but he has no intentions of taking the artwork down.

Walker said he would no longer support the coffee shop until the artwork is removed.

The artist who created the paintings, Jayson Musson, is no stranger to controversy. In a blog post from February 2007, Musson mused that he didn’t know how long his writing privileges will last for his now defunct column in Philadelphia Weekly, “Black Like Me.”

Musson explained to me that the paintings were a lighthearted way to poke fun at the Obama “mania,” and he found it comical that people are acting like the new president is a messiah instead of a person.
In regard to Walker taking offense to the paintings, Musson said it might have had something to do with the manner in which Obama was painted.

“Maybe he thinks my paintings hearken back to some type of racist caricature of black people, which is definitely not the case,” Musson wrote in an e-mail. “Every figure I painted in this series are painted in the same manner, so I don’t know how that could bother him.”

Walker took action by sending out a mass e-mail about the paintings, and so far, he is pleased with the results.

“As a result of our e-mail blast and the response the coffee shop received, the artist has posted a description stating the art is not intentionally offensive,” Walker said. “[Musson] now recognizes the content is unclear and can have many interpretations.”

Julia Wilkinson can be reached at julia.wilkinson@temple.edu.

The health care bill is only a small step in the right direction.

The former president addressed questions from community leaders and legislators ahead of a campaign event for Joe Biden.

Strum: The important points from the SOTU speech

The president’s speech should not be overlooked by college-aged voters.